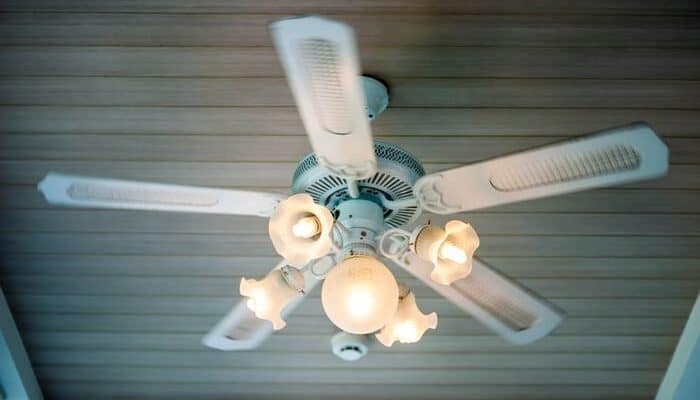 On those long, hot, summer days, there’s no better way to try and stop yourself overheating then by switching on your ceiling fan and enjoying the cooling breeze it generates around your home.

A ceiling fan is also a much more economical way of cooling yourself and your surroundings off, and definitely costs a lot less money to run than an expensive air conditioning unit.

Ceiling fans are often dual-purpose too and include a built-in light. This gives you the opportunity to continue cooling off as the hot days turn into unbearably warm nights, making it much easier to get to sleep and giving you even more value for money along the way. Take a look at our buyers guide if you’re in the market for a ceiling fan for your bedroom.

If you’ve got a ceiling fan with a functioning light in your home, then you might have noticed that it requires a candelabra bulb. But what is the reason behind this? And do you need to stick with candelabra bulbs or can you switch to something different?

There is a valid reason behind ceiling fans using candelabra bulbs and in order to make things a little clearer, we need to journey back a few years in history. So grab a seat, relax, and join us on our journey through time as we explain why ceiling fans have candelabra bulbs.

What is a candelabra bulb?

Let’s begin by explaining exactly what a candelabra bulb is. This type of bulb is shaped to resemble a candle’s flame and is therefore much more decorative than a standard bulb. This design also means that they take up a lot less space, making them a great choice for smaller lamps, cooker hoods, or other appliances that offer light but might not necessarily be able to house a standard bulb.

Their small size also plays a large role in why they are used within ceiling fans. The ornate designs that many ceiling fans are available in make accessing the lightbulb housing a little more difficult. But, the smaller the bulb, the easier it is to fit in around these intricate designs.

Don’t be fooled by their size though. A candelabra bulb is still capable of providing a lot of light and have a high number of lumens. This power, matched with their size, also makes them a much more energy-efficient bulb too.

Why do ceiling fans have candelabra bulbs?

Aside from being much more energy-efficient and easier to fit into an ornate ceiling fan, there is a fairly historical reason as to why they are used to provide light in ceiling fans too.

To begin explaining, we need to journey back to the year 2005. President George W. Bush was in power and during his time in office he signed the Energy Policy Act of 2005. This act was designed to give incentives to companies that followed new energy conservation and efficiency standards.

One particular section of this act limited stock-type lighting to 190 watts or less and, for many ceiling fan manufacturers at the time, switching to low-wattage candelabra bulbs was a sure-fire way of keeping within the guidelines of this new standard.

This isn’t the end of the story, though. In 2007, the Energy Independence and Security Act came into effect and brought even more changes with it. This act was designed to industry-wide energy-efficiency standards and help move the United States towards achieving greater independence in energy and security.

An additional section was made to this act in January 2014 which commanded that all industries started using 60-watt incandescent bulbs that were at least 25% more energy-efficient.

So, with this new rule in place, both retailers and manufacturers found themselves no longer able to sell or import this type of bulb and forcing them to provide much more energy-efficient options for their customers.

Many manufacturers, including those that designed and created ceiling fans, decided to make life easier for themselves and switch to a different sized light bulb altogether. This is where the candelabra bulb comes in!

Switching to a different bulb size across all models was a clever move by ceiling fan manufacturers in the long run too. Not only did this mean that they were meeting the new standards that were outlined in the amended section of January 2014, but by staying under the regulated 190-watt allowance they’ve also stayed in line with every amendment since.

There are, of course, a lot of homes all over the country that have ceiling fans that were manufactured before any of these energy-efficiency acts came into force. And, whilst you might want to continue using the same bulbs you’ve always used for it, we’re all becoming increasingly aware of how important it is to reduce our carbon footprint.

Even the smallest changes can help fight against climate change, and one really good way to make an older ceiling fan more energy-efficient is to switch from incandescent to LED bulbs. This is because LED bulbs use a lot less wattage but are still able to provide a really bright light.

Making this switch will keep you under the 190-wattage regulation without sacrificing any light quality, and the energy-efficient design of LED bulbs will help save you a lot of money on your electricity bill as well.

Although candelabra bulbs are most commonly designed in a way that resembles a flame, there are some that come in a variety of different styles. Some feature smoky glass to produce a warmer light, and some have a copper filament that allows you to make more of a showpiece of your lightbulb.

Some candelabra bulbs are even capable of producing multiple different colors and are often accompanied by a remote control. This lets you select a particular color to match your decor or set the mood at a dinner party. You can choose strobe effects or smooth color changing patterns too, really letting you create the perfect party atmosphere, all the while staying cool under the air circulated by your fan.

Of course, this mix of modern designs and the vast array of options available can make finding a candelabra bulb that fits your ceiling fan a little more difficult. If you’re unsure about what bulb your ceiling fan needs, the general rule is that any bulb that displays “E12” on its packet will be the correct choice.

The bulb type’s number will usually be written on the ceiling fan too, so make sure you check that before you purchase as well. That way you’ll be 100% certain about which bulb type it takes, and you won’t have a wasted trip to your local hardware store.

Switching to a different type of bulb

If you’d like to install a ceiling fan in your home but you really don’t like the style or design of candelabra bulbs, there is a way of switching to a different type of bulb without sacrificing energy-efficiency or light levels.

You can do this by using a candelabra to medium base adapter. These are really easy to install and are simply screwed in place where you would ordinarily fit your candelabra bulbs. Once installed this will give you the opportunity to use regular household bulbs, or a particularly decorative bulb you’ve found to match your interior design scheme instead.

Bear in mind, however, that even if you choose to switch from candelabra to regular bulbs with the help of an adapter, your ceiling fan will still most likely have a regulated wattage of 190. So you’ll need to make sure you’re sticking to this even when you’re using an adapter. Take a look at our guide for the best LED bulbs for ceiling fans if you’re looking to change.

Whilst lighting isn’t essential to the main purpose of a ceiling fan, there’s no doubt that a model that can provide you with illumination as well as circulating cool air is a good option to go for. This will allow you to keep cool at night and see what you’re doing. Read our guide on ceiling fans with the brightest lights.

The energy-efficiency of ceiling fans isn’t only restricted to the bulbs they use either. Overall, running a ceiling fan all day is going to cost you a lot less money than an air conditioner. They’re much smaller as well, will be totally out of your way since it’ll be mounted on your ceiling, and makes a dramatically smaller amount of noise.

There are also ways of making older ceiling fans more energy-efficient too. Try using LED lights instead of incandescent bulbs. These use a lot less energy without sacrificing anything in terms of providing bright light.