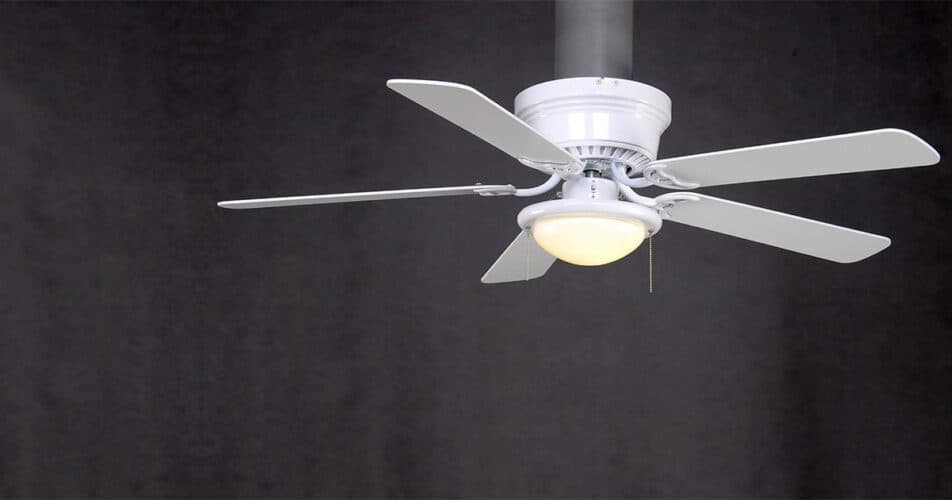 Hampton Bay ceiling fans are available in the sort of profusion and range you’d expect in the output of a car manufacturer. Big fans, small fans, wooden fans, metal fans, fans with lights, fans with remotes, indoor fans, outdoor fans – you get the point.

This coordinated marketing blitz on the ceiling fan world has lots of people curious about Hampton Bay and its dedication to the art of building slowly-moving breeze-makers for all occasions.

But before we take a closer look at Hampton Bay, let’s take a moment.

This is the 21st century, not a Tennessee Williams play. We’re not (at least, not all of us, though yum!) sitting on the front porch drinkin’ mint juleps and waitin’ for Big Daddy to come home. In the age of piped and portable A/C units, we’re still using ceiling fans? What gives with that?

A Brief History Of Ceiling Fans

Ceiling fans have an iconic place in American home décor history. In fact, while ceiling fans of one kind or another had been around since at least 500 BC, rotary ceiling fans of the kinds we know today were first built and deployed in houses in the 1860s, and they were an American invention.

Using a complex system which modern steampunk fans would love, they combined a stream of flowing water, a turbine and multiple belts to turn a fan in the ceilings of hotter houses.

Like much in that century, it was half-mad, half-wonderful, and it could easily have disappeared if there had been no market for it.

But ceiling fans appealed, especially in southern homes, so that when the first electric-driven version appeared in 1882, (with each fan being powered by an adaptation of the motor in the first Singer electric sewing machines), they were taken up in droves.

During the 1920s and 1930s though, they fell a little out of fashion in the US, and with the coming of air conditioning, they became very much a secondary option for room-cooling.

The energy crisis of the 1970s changed all that. While ceiling fans don’t actually cool the room’s air, they do create a kind of chilling effect, by helping evaporate sweat on skins, which has its own appeal in hot regions. The important point about which is that it takes a micro-fraction of the energy to do its job compared to A/C units. So ceiling fans got another boost in their popularity in the decade that style forgot, as a result of a chronic energy shortage.

There was no energy shortage in the 80s by comparison, so A/C roared into the lead, and stayed there for a couple of decades.

Now there’s a combination of economic and environmental concern that makes the use of high-powered A/C units unwise. The U.S. Energy Information Administration says the U.S. used around 3.9 trillion kilowatt hours (kWh) in 2019. Of that, direct end-users were responsible for 0.14 trillion kWh, or about 4% of total electricity consumption. Meanwhile the Environmental Protection Agency is calling on all Americans to reduce their own energy footprint.

That means there’s a strong new market for low-energy solutions to all the fundamentals of home life – including cooling systems. High-energy A/C units are still available in cases of extreme need, but wherever possible, it’s helpful to use lower-energy options. And the ceiling fan is back with a modern eco-friendly twist.

There are plenty of manufacturers taking advantage of the renewed interest in low-powered cooling systems, but Hampton Bay is one of the most organized, the most widespread and the most popular.

Hampton Bay ceiling fans are widely available online, but they have one particular home where, barring accidents, they’re likely to be available across the full range. That place…is The Home Depot.

There’s a reason for that likelihood, and the reason is simple. Hampton Bay is a company owned by The Home Depot, the…erm…home…of all things domestic, from lamps to ladles and fans to refrigerators.

Owning its own suppliers is by no means unusual for the DIY behemoth, which began life in 1978, and just forty years later in 2018 was listed as having revenues over $100 million, 413,000 staff across 2,284 stores, and was ranked #23 in the Fortune 500 list of the largest US corporations.

In hindsight, it seems a given that America, a country founded in independence of spirit by an initial wave of cabin-builders and subsequent waves of immigrants prepared to build their own futures, should take a national chain of DIY and household stores to their heart.

Whether you need to build a roof, dig a garden, cook a meal, wash a load or, or course, cool a room, the one-stop shop principle of The Home Depot appeals to the American sense of getting a whole range of things (and quite possibly a whole range while you’re there) for multiple projects at a time.

There’s also nothing terribly unusual about The Home Depot (Anyone actually ever say the ‘The’ when talking about Home Depot? Since we’re among friends, we’re going to drop it) controlling or owning the companies that make some of the things it sells.

Most supermarkets around the world have their ‘own brand’ products, and some, in addition, carry products made by companies they own, so as to differentiate them and let them compete for customer attention with their own branding.

By buying up key companies that offer specific product ranges or services, Home Depot can focus on what it knows will sell to its customers and clients.

The categories include: fans with remotes, fans with lights, indoor fans, outdoor fans, flush-mount fans, and fans with QuickFit installation (about which, more later). Each category exists to serve a particular need (indoor and outdoor, for instance).

Meanwhile the styles available are: Modern; Farmhouse; Coastal, Tropical and Classic. Each of the different styles has particular design cues to give the fans in its range a distinctive ‘feel.’

By combining categories and styles, you get a range with quite some diversity, meaning there should be a Hampton Bay ceiling fan for almost every room and usage, without ever running the risk of “Oh, evvverybody’s got that fan, darling” sameness.

Hampton Bay has a lot of models within each of its categories and each of its styles. Let’s just take a slow-motion whirlwind tour through some examples of the types of fan available, to give you a flavor of what the range can offer.

It’s worth noting that while the full range is usually available direct from your local Home Depot store, here we’re using Amazon links – sometimes for pricing reasons, sometimes for the one-click convenience and the potential of Prime delivery.

There’s a potential for confusion in lighted fans. After all, we just showed a fan with both a light and a remote. Again, this is part of the mix and match element of the Hampton Bay range.

Hugger 52 in With Light 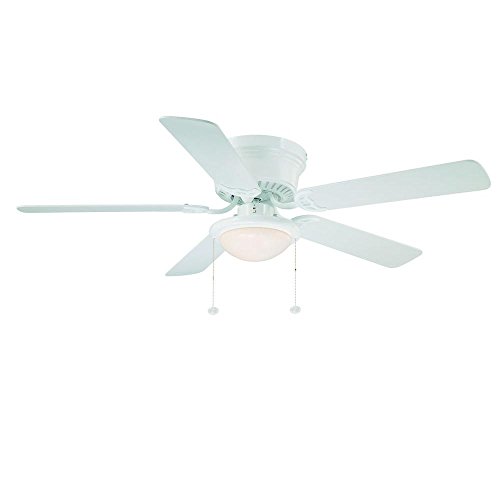 The Hugger 52 in With Light is a good example of the lighted fan which stays more traditional in its control method, using pull chains to control the action and speed of the blades.

With four color variants – matte white, brushed nickel, bronze and matte black – it’s a flush-mounted fan for low ceilings. That’s especially relevant when there’s no remote, because you’re reaching up to its pull chains to get a breeze.

A central light also means you can use it for sole or additional lighting in whichever room you choose.

The blades are reversible too, so you can get, for instance, white on one side and bleached oak on the other – again, adding to the number of configurations of fan you can get for your money with Hampton Bay.

The vast majority of ceiling fans on the market will be indoor fans, simply by virtue of what you need a fan to do. 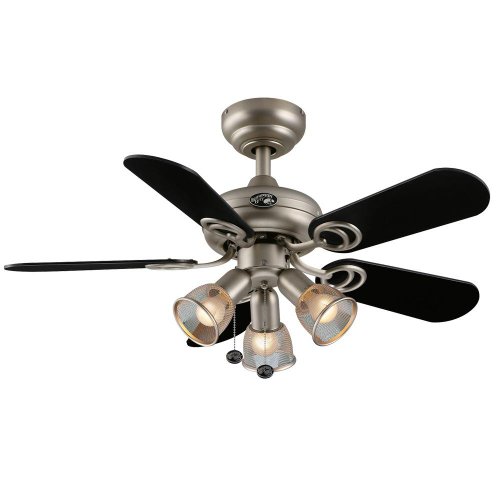 As if to prove the point about the overlap in Hampton Bay fans, the San Marino is not only an indoor fan, it’s a fan with lights, and an example of the company’s modern style – three ‘types’ of fan in one.

If you wanted to add size to the mix, this is an example of a ceiling fan for a smaller room – a bathroom, maybe – at just 36 inches.

The San Marino though, for all its small size, doesn’t skimp on options – there are five blades here, as well as three smaller lights.

Added to which it comes in three mount options, angled, downrod or flush, so as is the hallmark of the Hampton Bay range, by mixing and matching a range of options, the capacity to get a fan that’s unique at least within your social group is high.

Most outdoor fans from Hampton Bay are actually dual-environment fans, for both indoor and outdoor usage. 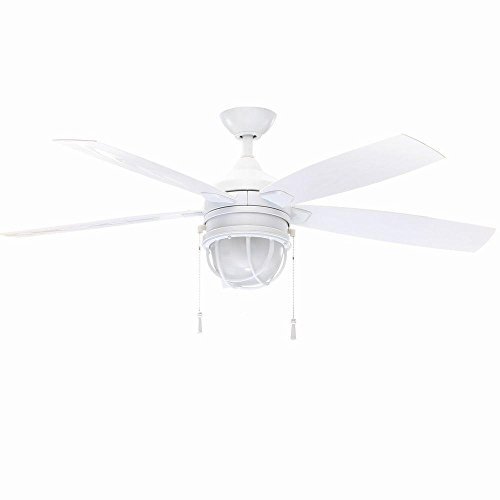 The Seaport is a good example of Hampton Bay’s outdoor fans. Available in white or natural iron, it can suit several different outdoor looks, and it comes in either traditional pull chain or remote control variants.

Five blades account for the 52 inch span, and it comes with a single central light. Style-wise, it fits in industrial, mid-century modern and modern categories, and gives a refreshing lightness to any indoor/outdoor environment like a porch, which in some regions of the country can feel like a heaven-sent boon in the still and stifling air of summer.

The Hampton Bay QuickFit system is something that expressly comes from the Home Depot logic of making DIY and home décor as easy for everyone as it’s possible to make it.

By simplifying the install proves to a handful of screws, fans available with QuickFit installation cut the time it takes to get your fat up and working by around 20%.

It also means that more people – even those not noted for their technical expertise around the house – need not be intimidated by the task of putting up their own ceiling fan.

There’s no need to call an electrician in or be nice to your neighbour even though they play their music loud at night when you’ve asked them not to. Break free, be independent, QuickFit your own fan, and then quite literally chill. 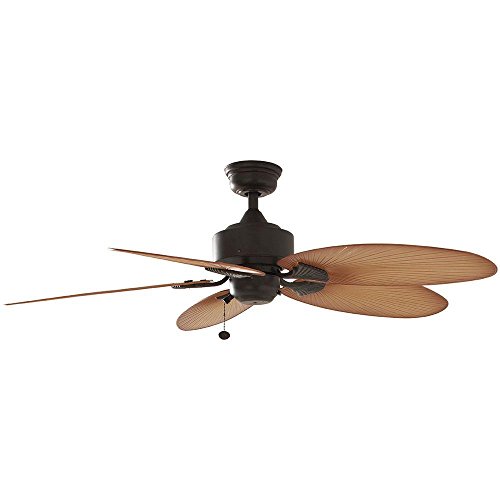 The QuickFit installation option has been added to a whole range of fans, among them the Lillycrest 52 inch indoor/outdoor fan.

With its five blades amounting to 52 inches of rotating fan, white and bronze options and three mount variants, it’s a typical ‘Choose Your Option’ Hampton Bay fan, meaning you can get it exactly the way you want it.

But the QuickFit option means you’re not having to struggle to put it up, whichever mount you choose. A handful of screws and you’re chilling.

The Mark Of The Maker

Hampton Bay, by virtue of being owned by Home Depot, is able to hit the mass ceiling fan market hard, and has relatively quickly bit into the sales of competitors like Hunter and Westinghouse.

It’s the fact that the company is owned by Home Depot, and that Home Depot is such a major national player, that allows it to diversify its ceiling fan offering so that you can get multi-combination fans.

An indoor/outdoor fan with three mount choices, a remote, three lights, a QuickFit option and a smart hub, thank you very much, no waiting – that’s the Hampton Bay difference.

And that’s down particularly to who owns it, and who therefore makes the Hampton Bay ceiling fans – The Home Depot.