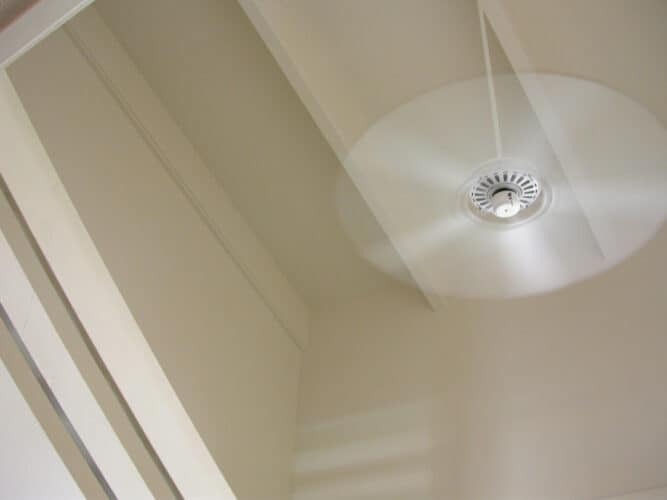 We all thought that it was pretty obvious, wasn’t it?

A lot of people are unaware that ceiling fans are engineered to turn both ways. That’s clockwise and counter-clockwise.

However, there’s a trick to adjusting your ceiling fan direction clockwise or counter clockwise.

And if you do it right, it will help you cut down on your HVAC bills year round.

Which way should a ceiling fan turn in the summer?

During summer, the blades of the ceiling fan should turn counter-clockwise so that it produces a downward breeze when you stand under the fan.

This creates an effect called ‘wind chill’ which helps you feel cooler by enhancing the rate of sweat evaporation on your skin. Ever rolled down the glass of your car window and felt the cool breeze on your face? That’s wind chill for you.

This in turn, allows you to set your thermostat at a higher temperature and still keep the room cool. According to the EPA, even a nominal 2 degree increase in thermostat temperature during summer can help you save up to 15% on energy costs.

Please bear in mind that merely turning a ceiling fan on does not cool the room. It will at best, augment the air conditioning system, making it more efficient.

Which way should a ceiling fan turn in winter?

During winter, the warm air in the room rises naturally to the ceiling and is often concentrated there. Reversing the motion of the ceiling fan blades clockwise pushes the warm air downwards making the room warmer. Once again, you can reduce your thermostat temperature and cut down on heating bills.

The only exception to this rule is if it is a vaulted ceiling fan.

Read more about why ceiling fans can really help in winter.

What is the correct ceiling fan direction for vaulted ceilings?

A fan mounted on a vaulted ceiling, irrespective of whether it is an arched one or not, is positioned at a height that makes it impossible to create a notable wind chill effect.

Even if you keep the fan speed high during summers, you will find that it does not make a significant difference in helping cool the room.

If you have a cathedral styled ceiling or a vaulted one that is more than the typical 8-10 feet height, then you can keep the ceiling fan in the counter-clockwise setting all year round.

However, the conundrum that most home owners face is being unable to distinguish between ceiling fan blade direction when it is switched on.

Which way is clockwise on a ceiling fan?

Clockwise is when the blades of the fan turn right like the hands of a clock.

In the counter-clockwise motion, the blades turn left.

One of the easiest ways to know if the ceiling fan direction is clockwise or counter clockwise is to stand under it.

How do I control the direction of the blades on my ceiling fan?

Most new ceiling fan models are equipped with remote control units or wall controls which help to change the direction of the blades. If you have an older model of a fan, then look for a tiny toggle switch that might be positioned on the motor housing. Flip the switch to change the direction of the fan. Read more about what the switch is for on a ceiling fan.

Hopefully this guide has demystified the correct way your ceiling fan should be turning!