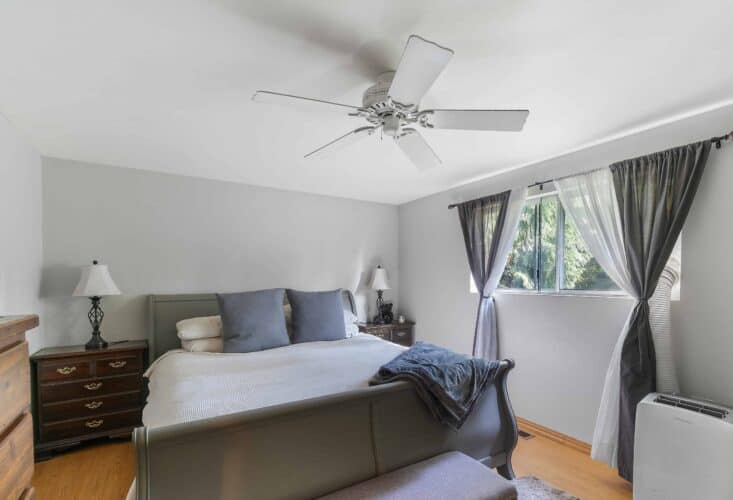 Shopping for a ceiling fan can be a daunting task if you’re not aware that there are multiple ceiling fan design types. Some of the popular ones are standard, low profile, dual motor, remote-controlled, oscillating, and even flush-mounted. With so many different names, it can be hard to know which one is ideal for your home.

A flush-mounted ceiling fan is mounted flush to the ceiling without a rod suspending it. It’s best installed in rooms with low ceilings so that you don’t hit your head on it.

So, how do you know if installing one is right for your home? There are plenty of factors to consider before making your purchase. In this article, we’ll give you a breakdown of what is a flush mount ceiling fan.

Can All Ceiling Fans Be Flush Mounted?

A flush mount ceiling fan is designed to be right up against the ceiling. Some ceiling fans can have downrods, lighting fixtures, decorations and mounting brackets that can mean a flush mount isn’t possible.

So, unless you remove some of these components, you won’t be able to get a ceiling fan ‘flush’ against the ceiling – hence why you will need to purchase a specific flush mount ceiling fan (also known as a hugger).

Some homeowners think that if they remove these components, they can transform their fan into a flush mount. However, removing any part of a ceiling fan poses a risk. The risk you’re creating is that the mounted ceiling fan will not be adequately supported.

If it isn’t supported, then there’s a big chance that your ceiling fan can fall. This puts you and your family at risk. Even if you do get a mounting bracket for a ceiling fan that isn’t meant to be flush mounted, the ceiling fan won’t be as flush and stable as a specifically made flush-mounted ceiling fan, so we highly advise against doing this.

If you’re looking to choose a ceiling fan for your home, it’s essential to consider if you should get a flush mount or a downrod. Both of these ceiling fans are designed for specific types of rooms.

As a homeowner, you’ll have to ensure that all home appliances are not violating any homeowner codes. One crucial appliance in your home that can easily violate a code is your ceiling fan. Remember, no matter what type of ceiling fan you get, it should not be lower than 8-9 feet from the floor.

So, we’ll give you a breakdown of the following two types of fans:

When Should You Use a Flush Mount Ceiling Fan?

A flush mount ceiling fan is designed to sit directly against your ceiling. It’s generally installed in rooms that have a low ceiling. The reason for this is because the ceiling fan will take up less space. Thus, it prevents you from hitting your head or other objects against it.

You should consider using a flush-mounted ceiling fan when:

When Should You Use a Downrod Ceiling Fan?

You should consider using a downrod ceiling fan when:

Can you Use a Flush Mount Ceiling Fan on a Slanted Ceiling?

When you put the fan on a slanted ceiling, the balance of the fan is compromised. Over time, this imbalance can cause the ceiling to become loose or start to wobble. Once the damage is done, the ceiling fan can fall, which is very hazardous.

A downrod needs to be installed when you have a slanted ceiling. The reason for this is because it helps stabilize and balance the fan. Without it, the ceiling fan wouldn’t last long and can be dangerous to you and your family.

So, it’s essential to consider the following:

Flush-mounted ceiling fans tend to produce less airflow due to their small design. They are lower to the ground, which means that they don’t pick up as much fresh air to circulate around the room. While they may be effective in a small bedroom, they aren’t going to provide enough airflow in a large room.

In this regard, flush-mounted ceiling fans are not effective.

A flush-mounted fan can be less of a hazard than downrod ceiling fans. Flush ceiling fans are designed to be pushed up against the top ceiling. So, if you have a low ceiling and a tall person walking around, there’s less chance that they’d hit their head.

Modern flush ceiling fans are now designed to be remotely controlled. Unlike a downrod version, a flush-mounted ceiling fan doesn’t always house the electrical wiring. Due to this, many models offer remote control.