The library. The study. The shed. The bar. The sports ground.

All places where, throughout history, men have been able to go and unbuckle the belt of respectability. Be themselves, unencumbered by any need for correctness, and set the animal that is man free without breaking rules or scandalizing the feelings of polite society.

With perhaps more honesty than we know, in the 21st century, we’ve taken to bringing those environments home and calling them ‘man caves.’ Man spaces, with just a touch of the animal about them.

To each man, his own cave. Whether it’s the feel of the sports bar or the thrill of the pool hall, the personal movie theater or the quiet reading room, they’re spaces that can truly embody an uncompromising personal style and show the nature of the owner’s masculinity.

Ceiling fans are probably a big part of that design concept.

Why should they be?

Firstly, because they have a perfectly rational function in this setting. Wherever you find a man cave, you’ll find a man or men, able to let things slide more than in usual society. Men proud of their ability to belch a favorite song, and unashamed by sweat. Wind-breaking Vikings with the timing – and sometimes the satirical edge – of Shakespeare. Men unconcerned with taking the remnants of yesterday’s sandwich to the garbage.

That means anything that keeps the room cooler than usual, or at least keeps the air moving, is a benefit to the room, stopping the musk and fug of the Man Zone from knocking out any incomer cold, like Ali on a good day.

But perhaps even more than their practical function, ceiling fans play in to a lot of the retro machismo environments men feel are cool.

From the sport bar, where the fans are trying to keep a lot of excited, sweaty men cool throughout the intense togetherness of a full nail-biting game, to the 1930s detective office, where a man sits in a full suit and hat beneath the slowly-rotating ceiling fan and works out how to make a difference in a world that normally crushes little guys like him.

The rotation of a ceiling fan has become a cultural shorthand of machismo, so every man cave should have one.

But this is the 21st century, where we can’t help adding high tech to everything we own. That means modern ceiling fans are already about six times cooler than any ceiling fans that have gone before. Designed within inches of spontaneous combustion, packed with features and options that let you turn them into man cave feature items, let’s take a look at some of the coolest man cave ceiling fans available today. 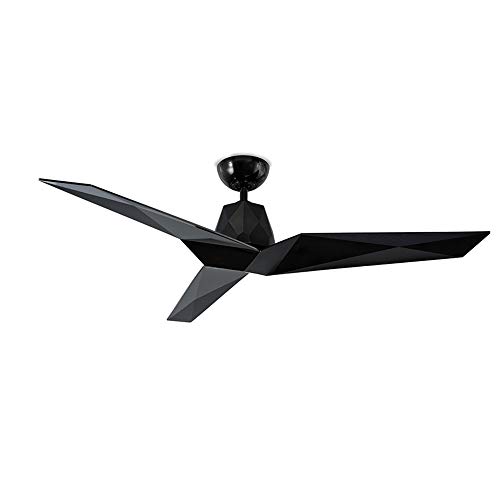 Oh heck to the absolute yes. The Modern Forms Vortex ceiling fan is part modern art, part stealth plane. It feels like it should have its own TV commercial where other ceiling fans fall at its blades in recognition of just how sexy a thing it is.

Designed with unfathomable blade angles, it’s especially effective if you get it in gloss black, because then it has the look of a super-cool drone, adding a Goldfinger vibe to your man cave.

It’s cool, but just a little intimidating, speaking to the essence of the man cave aesthetic. Your friends will know they’re welcome, but that you’re just a little cooler than they are as the Vortex rotates above their heads.

It is of course perfectly safe, but it has the look of a thing that could be detached with the press of a button, and set to fly about the room, chasing down any false friend and pinning them to the wall.

Of course, intimidating your friends is not very cool.

But it is very, very man cave behavior.

The look is ultra-modern, but that’s not all there is to the Modern Forms Vortex. Gone are the days of pulling a chain or even pressing a button on the wall.

You can control your Vortex from your smartphone – again, pure supervillain technology, and if a man cave is not basically a lair then it’s just a basement with pretentions of grandeur.

Even better, even more supervillain? Voice command, through the likes of Amazon Alexa, Google Assistant and Nest compatibility.

So it looks great, has an intimidating vibe, and obeys your every command. Give it a quirky name and prepare to get your Bond villain on. 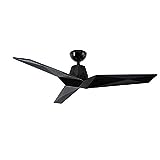 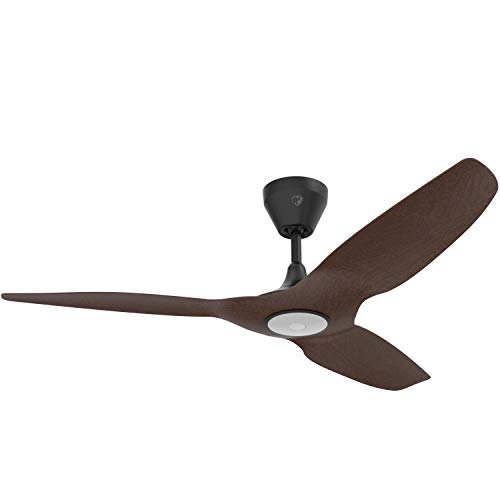 Less inherently intimidating than the Vortex, its blades have that gorgeous curved propeller vibe that speaks of an earlier era of engineering and design.

As with the Vortex though, the Haiku comes with a high-grade DC engine, and you can control it through an app on your smartphone.

If you have an Alexa, Nest technology or ecobee3 smart home tech, you can do the voice control thing too.

If your aim is not to intimidate your friends, but to cool them down in an elegantly retro fashion while making use of all the benefits of modern technology, the Haiku’s probably your fan of choice. 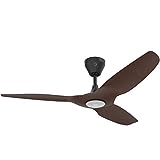 If your man cave has a sporting theme, there are fans out there especially for you. 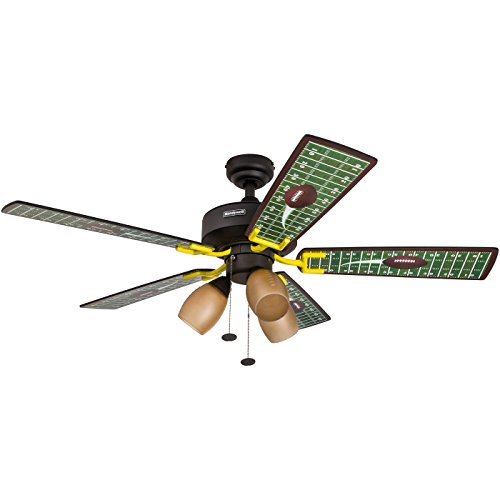 Want a football-themed ceiling fan? Honeywell has your touchdown. Lights made to look like footballs and blade graphics to look like the field mean there’s not a lot more you can do to make this fan an homage to the great game.

The blades are 48 inches long each too, so it’s not as though the graphics will get lost up there – you should be able to fully appreciate them, keeping you cool while you cheer on your home team.

If you have a man cave of medium size, they’ll even be a standout feature of your cave chic. Just make sure not to get your foam finger caught in the blades during celebration cheers.

The Honeywell Touchdown is a more standard ceiling fan, controlled by a pull-chain (football chain pulls are also available, in case you want to push your football love to the next level).

That means you’re free to dedicate your attention to the game in progress, rather than fiddling with a phone app or yelling at an Alexa to turn up the blade speed.

That said, the fan is compatible with standard Honeywell ceiling fan remotes for extra fingertip control. 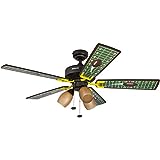 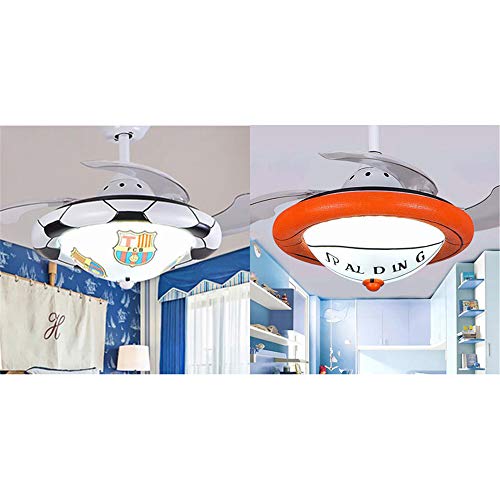 Want to feel like you’re courtside, or show your undying love of basketball?

The NIUYAO basketball light and fan combo will give you the vibe, while keeping smaller man caves cool in the heat of the action round the hoop.

Operated by pull-chain or remote, it’s a four-blade fan with a central light feature.

Even in smaller man caves, you’ll want extra lighting to add to its glow, but the fan speed should be enough to cool your fevered brow as you cheer on your chosen team.

When time stands still with the ball in the air, and you promise to live a better life if it goes in the basket. 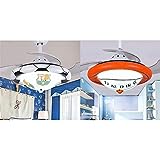 Who wants to be ordinary?

Who especially wants to be ordinary in the comfort of their own man cave?Nobody.

So step outside the everyday, and let’s take a look at some of the most unique ceiling fans out there, that give an insight into the character of their owner. 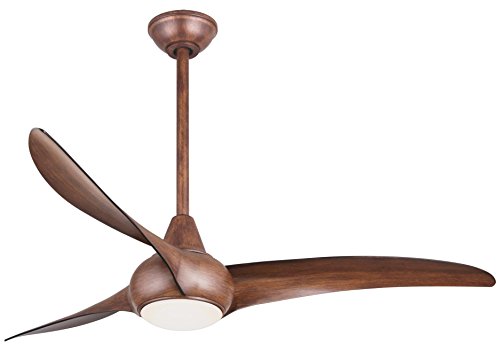 For a ceiling fan with a difference, try the Minka-Aire F844-DK Light Wave 52 inch.

Tooled in distressed Koa wood, and with a bronze finish to the downrod, it has a look that combines old world woodwork, natural sycamore pods and something altogether alien when combined with the dimmable central light fixture.

More calming than some of the fans in this run-down, it speaks of quieter, wood-panelled clubs where men gather not for sports but for hanging out, shooting the breeze and perhaps even making deals together.

Utilizing modern technology, the three-speed remote allows you to keep the air circulating just as fast as you like, and also comes with a reverse feature, so you can keep warm in your man cave in the winter, as well as cool in the summer months.

Quiet, understated, with the feel of a force of nature, it would be a mistake ever to overlook or underestimate the Minka-Aire. 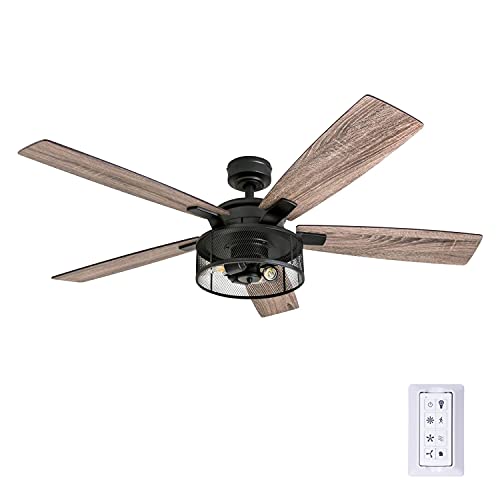 If you want to give your man cave a rustic, homely feeling, what could be better than a fan with blades made of barnwood?

The Honeywell Carnegie combines rough pine/chestnut blades with a little industrial chic in a bronze-finished motor-housing and Edison-style lightbulbs, for a real retro look and feel.

There’s nothing retro about its operation though – the motor has three speeds and a reverse function for warm air in winter, and you control the fan by remote.

There are also some extra cool options, like ‘smart sync’ for easy set up of the fan, and delayed effect lighting at the push of a button. 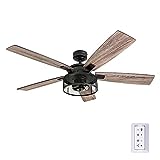 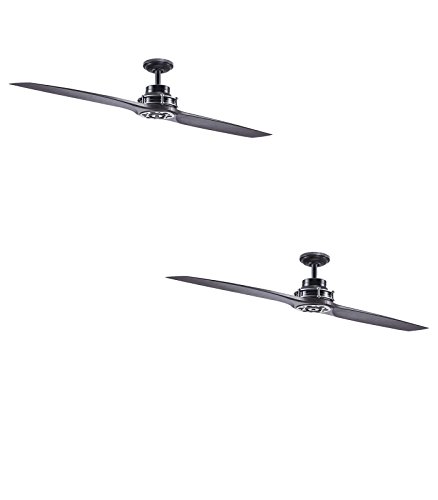 Aviation nerd? Engineering enthusiast? Step right this way and pick up the Kichler 56” 2 Blade. It’s reminiscent of an old-style plane propeller, the two fan blades and black antique pewter accents giving it a look that you’ll either want immediately and deeply or not at all.

If you want it immediately and deeply, accept no substitutes.

The Kichler fan is steeped in the engineering of a bygone age, wood and metal in a harmony that’s a thing of beauty forever.

The blades have a rosewood finish, and the airplane-inspired motor enclosure has an extra bonus for machine heads, in that the bolts and screws are exposed.

While it comes with a pull-chain mostly because you’d expect something this elegant and retro to have one, you can also operate the 3-speed reversible motor by remote.

The right owner will be in danger of wasting a day away in their man cave watching this thing go round, and dreaming of older days than they themselves have ever experienced.

There are as many different man caves as there are different types of men. Planning to man cave your garage? Check out our list of best garage ceiling fans.