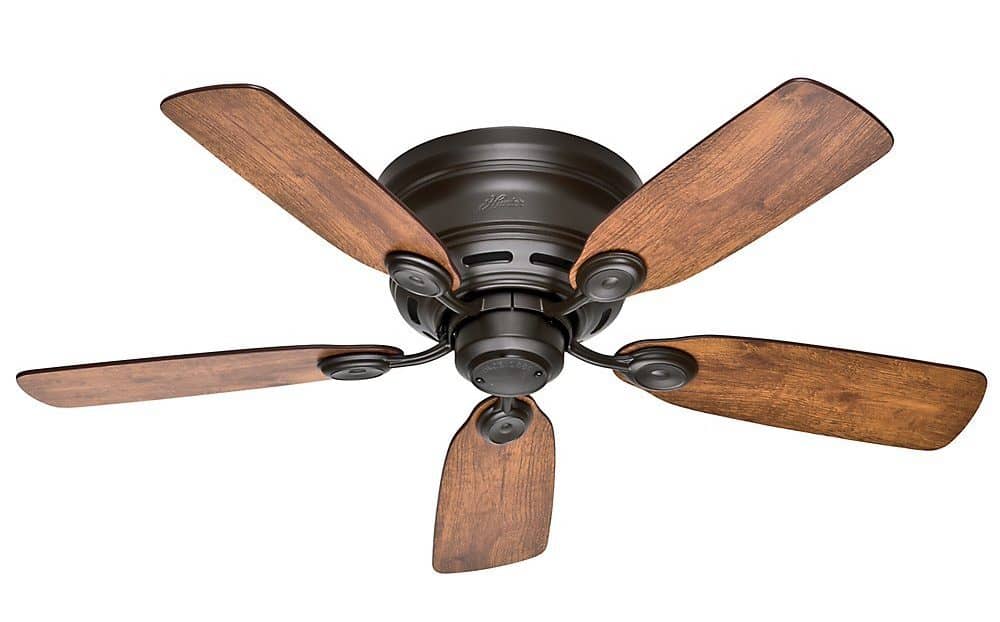 Summers can be maddeningly hot, and a ceiling fan can help ease your discomfort away with just a few clicks. The fan can do the work of cooling you off without putting a dent on your energy bills.

The low profile ceiling fan, also known in the business as a hugger or flush mount fan, is positioned nearer to the ceiling, unlike standard ceiling fans. Because of this, it is recommended for homes and rooms with low ceilings.

It is also a ceiling fan that will work in small apartments, offices, and condominium units. If you are searching for this kind of ceiling fan, you may be interested in reading this review of the Hunter Fan Company 51061 Low Profile III 42-Inch Ceiling Fan.

>> Check Out The Full Details on Amazon Here <<

A flush mount or low profile ceiling fan is a safe means to get your cooling breeze in homes or offices that have low ceilings. The fan blades of this unit are built in a manner that it can be mounted on the ceiling.

This particular design not only makes the fan efficient but also safer for inhabitants of places with dropped ceilings. It is also a great fan for children’s bedrooms and playrooms where plenty of physical activity and play happens. One example of a flush mount model is this product from Hunter Fan Company.

Even though its design allows it to be positioned near the ceiling, the Hunter Fan Company 51061 Low Profile III 42-Inch Ceiling Fan can still provide similar output and impact as a standard electric fan.

Flush mount models often come 6 to 9 inches down from the room’s ceiling, which serves as an assurance of safety. These fans can also be utilized to improve the style or décor of the room.

The majority of ceiling fans also act as ornamental pieces and they can come with lights or not. Ceiling fans often vary in terms of design and color so homeowners can actually choose one that best fits the design scheme of their home or a particular room in the house. Flush mount fans are often recommended for small-to-medium rooms and rooms that have low ceilings. This is due to the fact that the unit loses its efficiency if placed in a room that will not match the size and the purpose of the fan.

One of the best aspects of this model from Hunter Fan Company is that it comes with 5 blades. Having more blades in a fan setup makes for better balance and air movement. The fan also includes a longer chain, which makes shifting speeds from the unit easier for consumers.

In addition, the fan does not display any signs of sound when used. The instructions that were provided for the fan were simple to understand, making installation a bit easier to undertake. There were no balancing problems witnessed; overall, this is a flush mount model that works decently for its price.

The ceiling fan performed well in most aspects; however, it did have one drawback. One problem that consumers might face with this product is that the fan only suits certain light kits.

However, if you would like to own this one, better search for light kit replacements that will suit the unit in your area first before making a decision. Make sure that those replacements are accessible and can be bought easily in stores near you.

If you can, you may opt to order online, but it will take some time and the shipping costs will add up to the price of the replacement kit. So before considering this model, make sure to do a bit of research on compatible light kits first.

It operates soundlessly so it will not bother activity. It is recommended for rooms that have lower ceilings and is safer to use on those kinds of areas.

If you need something for your children’s bedrooms or playrooms, this type of ceiling fan is a good choice. Furthermore, if you want something that will knock off spending on energy costs, check out the functions of a good ceiling fan. It will do the same as an AC but at a price that you can actually afford every month.

Head Over To Amazon To Take Detailed Look or To Purchase

Scroll back to top