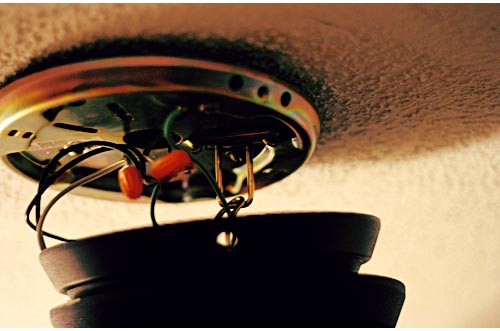 A ceiling fan in a modern home is rather a rare find, yet this doesn’t change how functional and helpful they can be in the warmer months.

They effectively circulate cool air throughout the room and keep everyone comfortable and free from sweat. What’s more is that they can save you quite a bit of money in bills, especially if you’re used to using air conditioning units.

Sure, ceiling fans won’t be quite as effective, but the difference in the cost of running each option is phenomenal.

Having said that, not everyone wants a ceiling fan in their house. While they are great retro pieces that cause a statement in many homes, ceiling fans sometimes just don’t fit into your interior design mood boards.

Some people prefer a modern light fixture instead, or maybe your ceiling fan has run its course and come to the end of its life (we’ve got a great post on whether ceiling fans are supposed to wobble or not).

No matter what your reason is for wanting your ceiling fan removed, we’ve got the best method available to avoid you having to call a professional in.

How to Remove a Ceiling Fan

Ceiling fans can actually be used year-round due to the fact that in the winter it can circulate hot air around the room, and in the summer it can spread cool air (read our guide about which way should a ceiling fan turn). However, they are not without their faults and sometimes need replacing.

Below we’ll be explaining the quickest, easiest, and safest way to remove your ceiling fan without help from anyone else.

Step by Step Guide to Removing Your Ceiling Fan

Once you’re happy that there is no power reaching the fan, remove all the bulbs and lampshades that may be attached. Quite a few shades require the bulbs to be removed before you can take them off, so complete this in the correct order to avoid breaking any of your accessories. Removing these aspects will both reduce the weight that you’ll have to hold, as well as prevent you from having to deal with broken glass or shades.

Removing the light bulbs of your ceiling fan is typically the same as removing any bulb from any light fixture. Globes, which are shades that wrap the whole way around the bulbs, need to be removed by taking out the thumbscrews first.

Removing the blades from your fan will make the rest of the removing process much easier, so grab a screwdriver and remove each of them. It may be worth asking someone for help keeping your ceiling fan still while you do this, as a sturdier base will save you a lot of time.

Both you and your helper will definitely get an arm workout with this step, so make sure that you’re both up to the task and are ready to get it done as quickly as possible. To remove each blade, simply unscrew the hardware near the blade irons.

You can usually find the screws on the top side of the blades where they attach to the motor. There will be around four screws per blade, so make sure that you get all of them before trying to yank the blade off of the fan.

Keep all of the screws in a safe place in case you plan to reinstall the ceiling fan somewhere else, or you’re going to sell it or give it away to a new home.

Once you’ve stripped the blades off of your ceiling fan, the material left that you need to remove will be much lighter and less bulky. This will make the rest of the process easier and less of a task.

Next up is removing the fan’s housing. To do this, you need to take away the canopy trim ring that you can find at the top of the unit. Not all ceiling fans will have this, but if yours does, all you need to do is squeeze them to remove them.

Now, remove all of the screws that can be found on the base unit. Once you’ve got all of these out, the fan unit should be able to be removed from the base plate. You might want to ask your partner to help with this as well, as it might be heavier than you think.

Remove the base plate by unscrewing the mounting screws. Again, keep these safe in case you need them for a later date. You never know when these could come in handy for a new DIY project.

You may find three or four wires that need disconnecting once you reach this step. Simply remove the wire nuts and unhook the ones that are attached to the electrical system. Make sure that the ground wire is removed, and this can be found inside the down rod.

And voila! Your ceiling fan is successfully removed. Remember to turn the circuit breaker back on so that the power flow is restored.

Is it Safe to Remove a Wattage Limiter in a Ceiling Fan?

You can definitely remove the wattage limiter from your ceiling fan without worrying about the safety aspect. Just make sure that the circuit breaker has been switched off before you start messing with the inside of your fan. The only thing you need to be cautious of when doing so is that you don’t overload your ceiling fan with your chosen lightbulbs.

Removing the wattage limiter requires you to work closely with the electrical wires. This means that it is imperative that you keep the power source turned off for the whole duration of this process. If you don’t, you are more at risk of harming yourself.

The pull chain on your ceiling fan is usually hooked up to two different wires. You need to connect the first wire to the hot wire that you can find in the lighting system. Do this by using a twist connector. The second wire, along with the two neutral wires, need to be connected to twist connectors as well.

Put everything back together and enjoy your new and improved ceiling fan, with no more annoying flickering lights and a much brighter output.

How to Remove a Ceiling Fan with a Down Rod

A down rod slightly alters the removal process of your ceiling fan, as you’ll also find two cups that you need to remove as well. One will be nearer the ceiling, and the other will be above the fan base unit.

Simply remove the fan base plate by unscrewing the hardware and unhooking the wires, just like we talked about earlier in our step by step process. While you do this, be mindful of the first cup at the base of the down rod.

After you’ve successfully removed this, you can unscrew the down rod from the ceiling. The rod will have wires inside it, so make sure that you remove these safely to avoid damaging your ceiling fan. Also make sure that you look after the bearings that can be found on the fan base plate, as these can often be damaged when removing the base plate.

Removing a ceiling fan can be a taxing and difficult task, but very impressive if you complete the process all by yourself. Better yet, if you asked a friend for help during any of the steps, you both deserve a big congratulations and pat on the back.

Congratulations! You successfully removed your ceiling fan without (hopefully) breaking any of it, and you just saved a load of money that you would’ve spent on hiring a professional. Now, all that’s left to do is wonder what you’re going to do with your old ceiling fan! Repurpose it, give it to a friend, or even reinstall it in a new room.