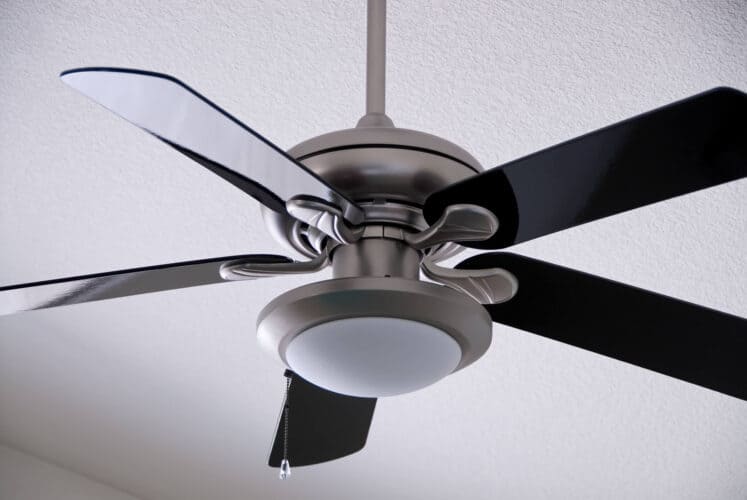 Choosing a ceiling fan for your home can be one of the most complicated parts of improving your home overall. We have seen several people that get completely caught up with the challenge of choosing the perfect ceiling fan for their home and wondering why some have five blades and others only have two.

A ceiling fan should have between two and five blades to be perfectly efficient for your room; two blades can produce just as much power as five blades. However, as the blades increase, the overall noise of the fan decreases, making five the most common amount of blades on normal ceiling fans.

You can choose from many fans when you need to improve the overall airflow in your home; with many modern fans having so many options, it can be confusing. We always recommend that you understand how fans affect the overall airflow of your home and can help keep things cool.

Does the number of blades on a ceiling fan matter?

Yes, the number of blades on a ceiling fan determines how strong the fan is, how much wind is being moved at different speeds, and the overall capacity of the fan. Fewer blades on a fan mean that air can be moved at a much faster speed, whereas more blades mean larger volume movement.

With modern fan motors and blade designs, the technology around ceiling fans has drastically changed and improved, allowing for different effects overall. We have seen many people become confused about why their two-bladed fans are not effective at high speeds.

More blades on a fan allow for greater air movement overall, at much lower speeds, which cools down larger rooms. While fewer blades mean that the motor can turn faster, creating fast-moving air that can facilitate the overall cooling of rooms that do not have air conditioning.

Other factors connected to the number of blades include:

Contrary to popular belief that the more the blades, the cooler the room will be, fewer blades work as effectively.
The drag is responsible for the functionality of the fan’s motor.

If a fan has more blades, there will be more drag on the motor, making the rotation of the fan harder. The fewer the blades, the easier it will be for the fan to rotate, thus bringing in cooler air.

The cooling effect will be better if you choose a blade that has been designed with an aerodynamic shape. These shapes make it easier for air to move around the room, thus making it cooler faster.

The position of the blades on the base of the fan is also important.

It is, therefore, better to choose fewer blades but with degrees between 12 and 15. This is more important if you have a low ceiling. Choose a fan that has blades at an angle instead of flat.

Your goal is to have efficient air movement in the room, and flat/correctly horizontal blades will not do that.

A fan with more blades with the perfect blade pitch could lead to too much cooling in the room, especially if the room is smaller.

Four blade fans and five-blade fans are the most balanced and perfect for home use. They circulate more air with less noise, and they are also perfectly balanced. However, if you want a fan for industrial application, you can choose a two-blade or three-blade fan. These usually produce more air faster and also function with a lot of noise.

Given that noise isn’t a significant factor in industrial settings, they will be perfect for your needs. For homes, on the other hand, it’s not advisable to use 5 or 6 blades. They will consume more power by their slow circulation even though they are more silent.

Most people prefer to have silent fans that are capable of producing a cool breeze as it doesn’t interrupt the people in the room.

Most of the time, four-blade fans and five-blade fans achieve the same way. However, if you get more than five blades, you could end up with a fan that produces a gust of air instead of a breeze. Choose a fan that has between 4 or 5 blades, and you’ll get that breeze effect.

While two or three blades are also capable of producing a breeze instead of a gust, they can sometimes be loud. They are good at producing maximum airflow, but they have more noise.

More blades will produce less noise but less airflow as well-meaning they are likely to use a lot of power to cool the room. Because of these, five blades are the best.

They don’t produce as much noise, and they are still capable of cooling the room faster. They are also well balanced, which means they will not wobble around.

Does the number of blades on a ceiling fan make a difference?

Yes, the number of blades on a ceiling fan does make a difference in how the air is being moved across a room. More blades mean a higher total air pressure, making cold air exchange at the bottom and the top much faster, while fewer blades mean faster-moving air overall.

When you are trying to use the fan to cool you down directly, you usually want air moving faster, whether this is pulling air down or up from the ceiling. This is why fans with fewer blades are usually popular in homes with no air-conditioning, as the fan works to cool you down.

Fans with five or more blades are always angled to create the maximum pressure change in a room. Helping to make airflow throughout wider spaces, often not creating a wind that is felt directly at all times, instead of creating a movement of air in otherwise stale environments.

Yes, the more blades your fan has, the quieter it will naturally be, as the blades are making an almost perfect vortex. A five-bladed fan can function perfectly, with the only sound made from it being the motor buzz that it is making, which is why many people still prefer to use them.

As modern technology has also helped to make stronger, smaller motors, the problem of motor noise has diminished greatly. Older five-bladed fans may still make a noise when turning at a slower speed; however, most of them can be replaced with newer, stronger motors to overcome this.

However, more blades will always mean more strain on the motor, with the fans eventually needing to have the motor replaced even if it was only ever used to slow speeds. The weight of the blades will eventually cause the motor to be damaged and require more work to be fixed entirely.

How many blades on a ceiling fan create the best airflow?

There are several situations where five-bladed fans are not used when considering airflow, with most of these requiring different conditions to work properly.

Hotter countries that do not rely on air conditioning and modern technology have meant ceiling fans have undergone a quiet revolution. We have seen several popular fans with much less than five blades; we have also seen a few environments with more than five blades.

Number Of Blades On Industrial Fans

Industrial fans are always as simple as possible and will not have any ornaments on them; instead, they are focused on doing one thing. This is why you can usually find that your ceiling fans in large warehouses are simple three-bladed or two-bladed fans turning at high speeds.

Often these fans are not turning in the way people expect, usually pulling air up and helping the larger system control the heat. We have seen several larger systems with extractor fans that rely on internal industrial ceiling fans to move the air around the room.

The Number of Blades on Metal Ceiling Fans

Metal fans will generally never have more than four blades and will work at speeds considered quite dangerous. Further, the fans are often only equipped with two blades wherever needed, fitted with the strongest motor possible.

This makes metal ceiling fans some of the strongest and fastest fans you can find on the market, easily moving air throughout entire halls. However, the caveat is that metal ceiling fans don’t suit everyones taste, so not suitable in all situations.

This has gained popularity over the last few years as electric motor technology has drastically increased. This means that on the market right now, there are extremely efficient and strong fans that only have one or two blades on them.

Further, these artisanal fans usually perform at higher speeds than other fans because of the stronger motors that have been placed in them. With many fans being balanced to work better than normal mass-produced fans, they can also function at lower volumes.

The design of your home could also determine how functional a ceiling fan is.

Some people can use seven blades in their homes. If you want to use the fan outside, you should also consider its ability to withstand moisture. For instance, dry rated fans are usually damaged by moisture easily and should only be used inside.

Damp-rated fans, on the other hand, are perfect for outside use because their blades can withstand the humidity. Wet rated fans can be used in open outdoor areas because they are more resistant to weather conditions, including rain.

In addition to the number of blades a ceiling fan has, it’s also worth considering the length of the fan blades. Read our guide to find out if you can change the size of ceiling fan blades and if it positive or negative effect.