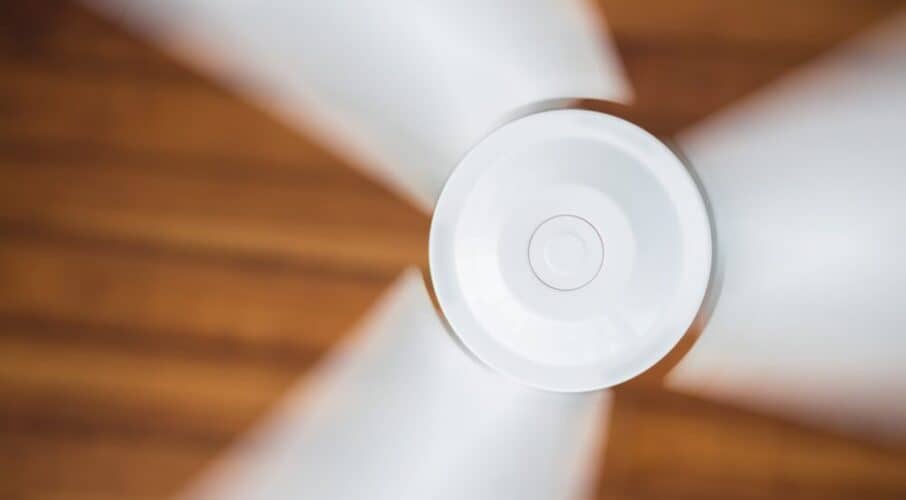 Sometimes certain gases in the environment are extremely harmful to you and your family. You may think that such gases are mostly found in industrial areas, high vehicle trafficked areas and such like.

However, did you know that some of the gases might be in your own house and causing some unknown health damage to the family? Well, one such gas is radon.

According to many people, ceiling fans can help in reducing radon, but can they?

Let’s try to understand everything about it.

What is radon gas?

Before we talk about anything else, it is necessary to know what exactly is radon. Let’s try to go back to high school. You may have heard of the radioactive element and gas, radon.

Now, this radon gas is usually released from the ground and may get trapped inside houses.

But why is this gas so harmful to your family members?

When the lung cells receive the radiations of radon, there’s a potential they may mutate and become cancerous.

Due to this, the EPA or Environmental Protection Agency has set the maximum levels of radon that should be in the house. In case the levels go beyond that, you may have to take some preventative measures to avoid health risks.

Moving onto answering the main question, there are various methods of reducing the levels of radon in your house. One of them is by using a ceiling fan.

So yes, ceiling fans can potentially help in reducing the levels of radon and here’s how they can do it.

During the decaying process of radon, it releases some harmful particles, also known as the alpha particles. Moreover, these particles can also break down into unattached radon particles or radon daughters. The radon daughters are the ones responsible for releasing a charge that can cause mutation in cells.

Coming back to the point, when a ceiling fan displaces the air, the radon particles are also displaced in a way that they get attached to the furniture and walls. Once attached, they no longer can release a free charge and thus, lead to a reduction in radon levels.

Hence why ceiling fans can potentially reduce the amount of radon and therefore lower the risk to you and your family.

Can You Run a Ceiling Fan During a Radon Test?

Radon is a type of gas that has absolutely no smell, taste, or color. So, there’s almost no way of knowing whether your house has an increased amount of radon or not. However, you can still go for a radon test that can help in knowing the levels of radon in a house.

So no, you cannot run a ceiling fan during a radon test. During the test, you need to follow some instructions. One of them is turning off any electronic device, which causes the filtering of air. This includes a ceiling fan.

However, keep in mind that if the radon testing device is in the other room, then you can turn the ceiling fan back on in the other room so long as it is not effecting the air flow in the room being tested.

What Time of Year Is Radon Highest?

Radon levels fluctuate throughout the year depending on various factors. One such factor could be the season.

So, when it comes to seasons, radon is the highest in our houses during the months of winter. Some of the probable reasons for this could be:

Keep in mind that it isn’t always necessary that the levels of radon are only high during winters. Due to some conditions, they may also be high during the months of summer.

So, if you’re worried about the radon levels in your house, you should consider getting a radon test performed.

Did you know running a ceiling fan during the winter has other benefits?
Read our article to find out if ceiling fans help in winter … hint – they do!

In conclusion, radon is a harmful radioactive gas that is found in most houses at low levels that are not any cause for concern. However, if it accumulates, it can become harmful.

If you are concerned about radon levels in your home, we recommend to call in a professional to conduct a radon test for you, however, in the meantime, consider a ceiling fan to help disperse radon particles in the air.