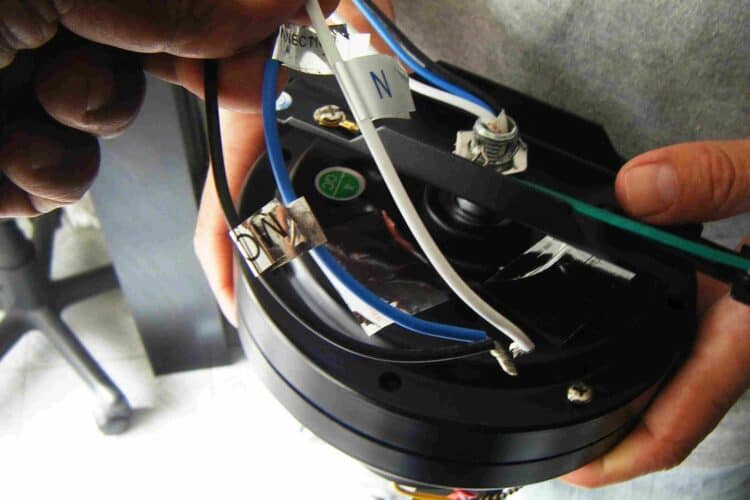 It can be a frustrating thing when a ceiling fan doesn’t work. Whether the problem is a fan that won’t run or lights that won’t come on, people with ceiling fans are dismayed at the idea that theirs isn’t functioning.Many speculate whether a blown fuse in the fan is the cause of the problems. Electricians dismiss this idea stating ceiling fans don’t have fuses built within them.

Do Ceiling Fans Have Fuses?

Ceiling fans don’t have fuses. The only fuses involved in the operation of a ceiling fan are in the electrical circuit breaker that controls the fan.

Is there a fuse in a ceiling fan light?

Some confuse the wattage limiter in the light kits for a fuse. The wattage limiter is an inline device that prevents most fans from drawing more than 190 watts. Looking inside the area where the bulbs screw in, you will find a hot terminal and a neutral terminal, which are a section of threaded metal around the cylinder. There typically are three hot wires connecting to the terminals and a connection ground to the metal portion of the fixture. None of these things include a fuse.

Why won’t my ceiling fan work?

Several things could be going on to prevent a ceiling fan from working properly. Problems could include:

All of these issues are easy and inexpensive to fix. Most can fix the problems with a few simple tools as a DIY project.

What can I do to fix my fan?

First, determine exactly what isn’t working. Put the remote aside and pull the power chains for the lights and the fan. If those come on, then your problem is with your remote. A common problem people have with ceiling fans is needing to replace the remote batteries – It really can be that simple!

A working fan but non-working lights could lead to another simple fix: changing out the light bulbs. It is slightly uncommon for all to blow at once but it does happen and that is especially true if they are all replaced at the same time. Read our guide to find the ​best LED bulbs for your ceiling fan.

Those who have a completely non-working fan should first check their electrical circuit breaker to see if a fuse has tripped. Open the circuit breaker. Find the fuse and flip it on, then check to see if the fan works.

It’s time to check for burned wires, replace the fan capacitor, or install hum control. The action you take depends on your specific problem.

Checking the wires is a pretty simple process. Use a voltage tester to check terminals in any wall switches controlling the fan to see if you have a defective switch. Turn off the power before unscrewing wires from terminals.

Check the black wires – if they have power, you have a bad switch.

Ceiling fan wiring can be checked by unscrewing the light bulbs and looking inside. Test the wires on the light and the pull string with the voltmeter.

Remember to always properly maintain your ceiling fan to avoid it overheating or causing a fire.

A fan that will not increase in speed or that changes speeds on its own may need a new fan capacitor. Check the remote by flipping reverse and forward to see if that fixes it.

Also, make sure the remote and the fan switches are set the same. If all that checks out, change the fan capacitor. Read our guide on how to increase your ceiling fan speed.

There could be several issues causing your ceiling fan to hum, but the worst-case scenario is it needs an anti-hum feature. They are fairly easy to replace.

The rubber disc that attached the fan motor shaft to the blade is called the flywheel. It reduces blade vibration and sometimes needs to be replaced. Symptoms of this problem are the fan doesn’t run but you still hear the hum of the motor.

Flywheels are inexpensive to replace and are readily available at hardware stores.

Ceiling fans will eventually have problems, especially if you don’t maintain them properly. Fixing a ceiling fan doesn’t have to be a major project as most problems have simple solutions.

The key is to start with the most simple fix and work your way up through the mechanical aspects. At least now we’ve answered the question ‘do ceiling fans have fuses?‘ so you don’t have to go in search of one!

Please remember, if you don’t feel comfortable dealing with an electrical item, we recommend getting an electrician in to help you.