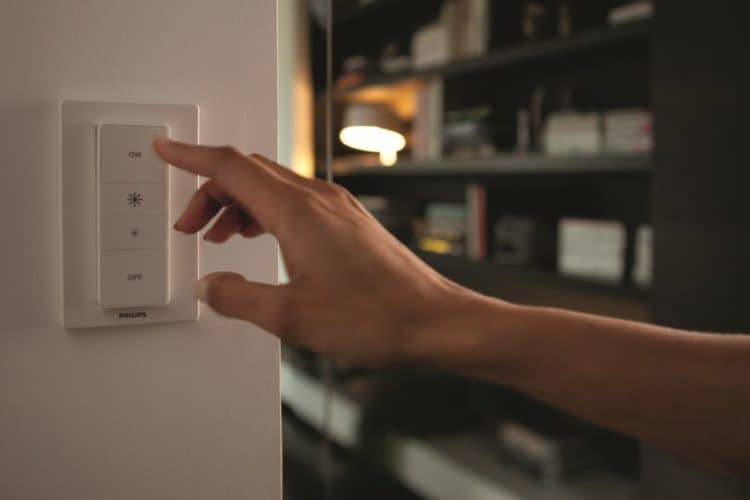 A ceiling fan is traditionally mounted onto the ceiling and uses four to six rotating blades to circulate air around the room and offer a cooling effect to anyone in the room. They also often have a light fixture in the middle of the blades so that you can position both your light and fan in the optimal position of the ceiling. There is no use having a fan in the corner of the room where no one will be able to feel the benefits.

Just because ceiling fans were more common and popular in the past, doesn’t mean that you can’t incorporate one into your house now. It will be an awesome feature piece and give your room a vintage and rustic feel to it.

Ceiling fans are typically electrically powered and therefore need to be wired into your house. They are operated by a switch either on the fan or mounted onto the wall. Traditional switches turn the light on to one setting of brightness, and allow the fan to turn at one speed. If you wanted more customization of your ceiling fan, opting for a dimmer switch may be the way to go.

Why use a dimmer switch for a ceiling fan?

Ceiling fan dimmer switches are great alternatives to boring push switches when you want to spice up your home. You can create an ambiance with the lighting, use it to start winding down before sleep, or simply use less energy than you were previously. What makes dimmer switches so great is that they also only take a matter of minutes to install, making them a great DIY project for busy homeowners.

Having said that, nothing is perfect, and unfortunately dimmer switches are much more likely to become overloaded than other types of wall control switches. If a switch is overloaded for too long, it could cause a fire. By all means, you can connect a ceiling fan directly to a dimmer switch, but you may run into problems along the way. An example of this is that the motor in your fan could be damaged and rendered useless.

A broken ceiling fan motor and a house fire are obviously not ideal outcomes, however, there is some good news. These hazards are generally associated with standard dimmer switches, and you can actually get models that are designed for use with ceiling fans. These allow you to control the speed of your fan quickly, easily, and without worry of dangerous outcomes.

Read our guide to find out does a ceiling fan need a wall switch at all?

What if my ceiling fan is already wired to a standard dimmer switch?

Having a ceiling fan that is already wired up to a standard dimmer switch is definitely not ideal because, as we mentioned earlier, it heightens the risk of fires and damage to your fan. If you don’t want to pay out for another fan, or worse, have to repair your home after a damaging fire, you’re going to want to remove the standard dimmer switch as soon as possible.

To do this, we’d suggest swapping the current switch out for a simple toggle model. While this won’t give you the customization aspect for your ceiling fan that you may have wanted, it definitely beats having a potentially hazardous fan in your house, right?

If there is separate wiring for the light setting and fan setting, you may be able to wire each set of wires onto two different switches. For example, you can wire the speed of the fan setting up to a simple toggle switch, although you won’t be able to control the speed of the fan, and you can wire the light function up to a dimmer switch. This will allow you to control the lighting level, which is better than nothing in our eyes.

The best option in our opinion is to purchase a dedicated ceiling fan wall control switch to avoid any hazards and give you all the flexibility you need.

Read our guide on what the blue wire in a ceiling fan does.

Bear in mind that you should check your homeowner policy before doing a job like this one. Some policies don’t cover the DIY installation and therefore may require you to hire a professional electrician to do the work for you.

Ceiling fans with separate wiring that allows you to connect two switches to one model will most likely be new and recently manufactured. If you’re dealing with a model older than ten years, or a vintage styled ceiling fan, you may find that you cannot wire it up to two different switches.

However, not all hope is lost, as you can wire a remote and receiver combination onto the fan and use this to adjust the light and speed settings. The only problem is that the remotes are often rather small and can be lost easily, which is why switches are the preferred option. When this is not achievable, though, there are still ways around it.

To do this is not an especially easy task, and you’ll need some extra 12-3 non-metallic electrical wire to install so that you can separate the light wires from the motor wires. You will also need:

SFGate has written a very helpful step-by-step guide on how to install a ceiling fan to a dual dimmer switch, which you can find here. There are 21 steps to follow, and they are not for the faint of heart. If you want to do this yourself, be prepared for a challenging and time-consuming job. Also, make sure you’re aware of all the necessary safety precautions before you begin following these steps.

If you’re unsure of how to do any of this or don’t think you’re up to the task of completing it safely and carefully, we’d suggest calling in a professional. They will ensure that the job is done to a high standard and you might not be as cautious about the safety of your new dimmer switch. Having said that, if you’re raring to go and up for a challenge, go for it! All the steps you need are in the handy guide, and you’ll be left with an awesome feature in your house that guests can marvel at.

What if there is only one available switch?

As we’ve said, there are still ways to get around the fact that your ceiling fan may only have one switch. In fact, there are two different options for you to choose from, giving you a choice in case one does not sound achievable or best for your house and individual situation.

The first option is to simply install a toggle switch onto your ceiling fan and control the light and speed settings with the pull switch on the actual fan. This is definitely the easier option, however, it may be quite fiddly and annoying to switch between the two settings. Of course, if you have high ceilings, you may not even be able to reach this switch, which is one of the reasons why wall switches are so popular nowadays.

The second alternative is to separate the wiring yourself and install a second wall switch to the new set of wires. This will take more time and will most likely be harder to carry out, but it may suit you better in the long run. You might need to run the wire across the ceiling and down the wall, which may be unsightly and ruin your interior design.

Said wire will reach a box on the wall which you can change for a dual switch rather than a single switch. You may need a building permit to do so, so make sure that you do your research before starting this DIY project to avoid fines or angry letters. While you may have to get used to wires reaching down your wall, this is a good method of ensuring that you incorporate dimmer switches into your home and ceiling fan.

Many homeowners like the thought of dimmer switches in their homes thanks to the level of customization that comes with them. However, ceiling fans are not always the best choice of electrical items to use dimmer switches with. You need to make sure you have the right kind of dimmer switch, and that your wiring is up to the coding requirements needed to safely carry something like this out.

Never use a standard dimmer switch or unchecked wires to hook your ceiling fan up to a dimmer. It is always better to be safe than sorry, especially when electricity is involved. Electrical fires are more common than you think, with 50,000 homes having one every year. 1,400 people are injured and 500 die from electrical fires each year, so make sure everything is correct and safe before attempting this DIY project. Read our guide to find out whether ceiling fans are safe.

We hope you’ve learned something useful from our article. Dimmer switches are impressive when installed correctly, and make a great feature for any home. Just remember to consult a professional if you’re unsure of what to do. Moreover, make sure you’re actually allowed to install dimmer switches yourself before doing so.