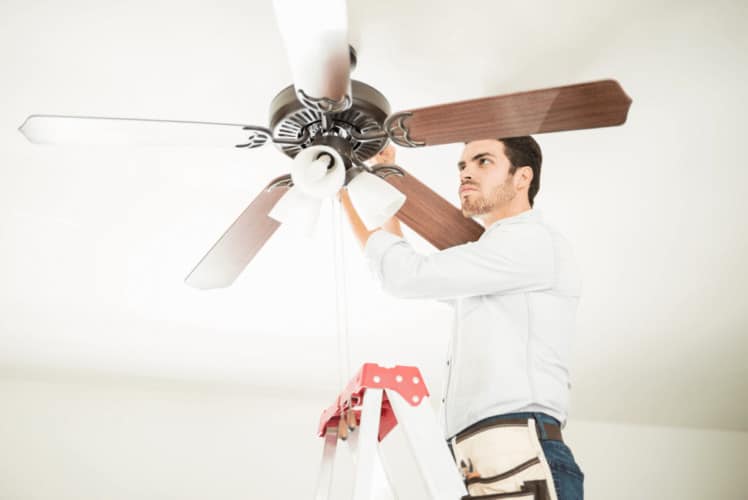 The length of the fan-blades should not be extended as this will result in the motor overheating and failure. Failure of electrical motors that are working beyond their design capability may fail that could result in an electrical fire. If you shorten the blades it will result in poor airflow performance from your fan.

If the downdraft created by the ceiling fan is too strong, a lower fan speed setting should be selected. If the setting is already at the lowest fan speed possible, you could consider adjusting the angle on the blades to a smaller pitch or replacing the blades with shorter blades.

It is not recommended that you make these adjustments without advice from an expert.

Let’s look at some of the possible causes of adjusting the size of the fan blades on your ceiling fan.

Can You Replace Ceiling Fan Blades With Longer Blades?

It’s not advisable to add longer blades to your ceiling fan. The additional load on the DC motor may fall outside of the operational capability of the motor and will cause overheating and premature failure of the electrical motor. Failure of electrical motors may result in an increased risk of fire.

The length and weight of the ceiling fan blades will determine the power of the electrical motor for the ceiling fan. Direct Current (DC) electrical fans are most commonly used to power ceiling fans due to their lower energy demand and higher torque capability.

The electrical engineer will specify a DC motor with sufficient power to drive the fan blades at various fan speed settings and the design pitch of the fan blades. The effect is that the fan will be able to create varying amounts of downdraft at the speed setting range on the controller.

If the ceiling fan blades are lengthened, the demand for the electrical motor will increase due to the extra workload caused by the longer blades’ increased mass and air resistance.

Do not attempt homemade modifications to ceiling fans. If your ceiling fan is not generating sufficient downdraft, consider replacing the entire ceiling fan with a larger model.

Can You Replace Ceiling Fan Blades With Shorter Ones?

There will be less blade mass and lower friction through the air by shortening the blades, thus requiring less strain on the DC electrical motor. The electrical engineer will select the DC motor to function well within the operational tolerances when fitted with the specified length fan blades.

The pitch and length of the blade are designed to create a downdraft at various fan speed settings for each model of a ceiling fan. If the fan is blowing too much air downwards, even at the lowest possible fan speed setting, the incorrect fan has been selected for the application. The fan blades may have been installed too low.

The building code defines a minimum installation height of seven feet, but a fan height of 8 to 10 feet is normal. Shortening the fan blades will create a lower downdraft without placing any additional strain on the motor. Decide whether this can be done aesthetically or consider replacing the ceiling fan with a smaller model.

The form and function of ceiling fans are determined by the number of blades, the length of the blades, and the speed and power capabilities of the electrical motor.

Modern ceiling fans use Direct Current (DC) electrical motors because they are almost silent, are smaller and lighter, and are more energy-efficient. DC motors can also produce more torque, and can their speeds can be easily adjusted.

The speed and number of the fan blades play a much bigger role than the length of the blades. Fan blades can vary from two to nine blades per fan. The more blades, the quieter the fan operation will be.

The Environmental Protection Agency (EPA) has mandated that all ceiling fans be identified as to their Cubic Feet per Minute (CFM) ratings. The CFM ratings must be clearly visible on the packaging and installation literature accompanying the hardware.

For a specific room size, you need to select the fan size according to the table below.

At maximum fan speed, the CFM has to be a minimum of 4000 cubic feet per minute if the CFM is higher than this, even better as you can always adjust the fan speed down to decrease the CFM if the ceiling fan is blowing too hard.

How Are Ceiling Fan Blades Measured?

The ceiling fan size is determined by measuring the length from the tip of a fan blade to the center of the fan and multiplying this length by two. The fan size is the diameter of the circular plane formed by the moving fan blades.

The best practice is to have at least 18 to 24 inches of clearance from any walls to the edge of the fan blades.

Care should also be taken when installing ceiling fans in the proximity of downlights. The fan blades musty not interfere with the light installed in the ceiling above as it will result in a very unpleasant light strobing effect.

It is not recommended to alter the length of ceiling fan blades as this may adversely affect the drive motor performance, resulting in a premature failure or fire risk.

Ceiling fans must be selected based on the size of a room and the cubic feet per minute (CFM) required by the architect or designer. The EPA mandates that the CFM data for each ceiling fan model be clearly displayed on the packaging and installation literature.