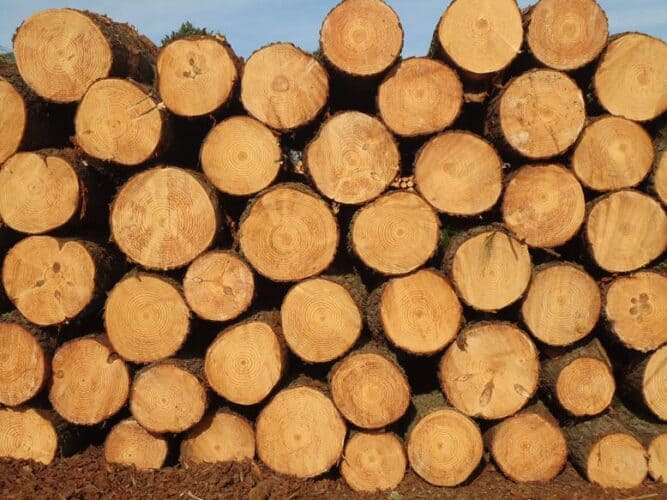 With the abundance of pine wood, this is a common question a lot of people have. And it’s a bit of a controversy too.

When you’re sitting by your fireplace with a book in hand or some music in the background, all you want to do is enjoy the crackling sound, the flickering light and the basting heat.

If the romance of the evening is not what you’re looking for, well, then there is the practical advantage of saving on heating fuel and electricity. But what if that piece of wood is pine?

Can you burn pine in a fireplace?

You can burn pine in your fireplace, however you have to be aware of the safety considerations first. Pinewood creates creosote which can stick to your chimney if not cleaned and maintained which can be a fire hazard. Pine also contains resin which can crackle and spit when burnt.

It is common to hear advice against using pine wood in a fireplace. But the explanation to why is not always that clear. Pine wood creates soot in the chimney that is often referred to as creosote.

It builds up in the chimney and damages the surface. But also, is highly flammable which makes it a fire hazard if your chimney does not get cleaned regularly. This is all true but that does not mean you can never lay your hands on a log of pinewood.

The Facts About Burning Pinewood

There is a lot of resin in pinewood which makes it burn very hot and creates a lot of crackling sounds when it is burnt.

If you are not careful, you might have to deal with flaming embers being spat out of the fireplace burning your carpet, or even worse end up with minor injuries.

If you are going to burn pine in your fireplace, we recommend using a good fireplace screen to help prevent this.

Pine wood is also rich in its sap content which means it creates tarry smoke that coats the inside area of a fireplace apart from the chimney. This is actually a fire hazard.

In fact, the sap from pine wood can also stick to fabrics making it quite a task to clean them. And when lots of creosote is deposited in your chimney, you run the risk of a chimney fire. Yes, that’s a thing.

The Misconceptions about Creosote

It is true that pinewood creates creosote but so does every other wood. In fact, hardwoods like oak and maple create more creosote than softwoods like pine and cedar. This happens when the hot flaming particles fly into the chimney and come into contact with the cooler flue. The vapor turns into a solid layer of creosote.
Learn more about burning cedar in a fireplace here or even whether you can burn pinecones here.

With pinewood, since it produces a fire that is relatively hotter when compared to other types of wood, the smoke does not move quickly. This means the smoke moves faster leaving lesser time fo the vapor to condense. When compared to that, hardwood burns slowly and in turn the smolders rise slowly. This means they hang around in the chimney for a lot longer and create more condensate.While you can’t escape creosote, you can manage it efficiently.

According to the Oregon Department of Environmental Quality, getting dry firewood that is at least six months old or has about 20 percent moisture is a good choice. Make sure you season the wood to create less creosote. Pinewood is fairly easy to season and is quick too. Just ensure that it does not get too dry because then it will burn too soon and you might not have enough left. You must also try and use smaller logs because that is an efficient way to avoid lots of creosote. And make sure you stay away from treated pine lumber.

The Reviews Are Mixed for a Reason

If you’re looking for expert advice, a lot of them say that avoiding pinewood especially for indoor fire situations is the best move. This is because of the safety concerns that come with this firewood. As explained above, the concern is due to the resin in pine which makes them burn hot. There is also pine tar which creates a lot of creosote which makes it a potential fire hazard.

But there are others who have some helpful advice for those who know their way around a fireplace. For this crowd, experts say that you can use pine for your fireplace if you are stringent with the maintenance routine and know how to keep an eye on the flame.

Pine sap, when regulated, can actually act as extra fuel. You might want to remember that when you’re checking the volume of wood in the fireplace. While you’re at it, also keep in mind that pinewood burns hotter than the other options. So, you don’t actually need a ton of logs to heat up the room.

Make sure your chimney is cleaned regularly and free of all the creosote. Keep an eye on the flame and see to it that it is not a low, smoldering fire. That actually creates a thick smoke and in turn builds up a ton of creosote in your chimney. If you have a new chimney though, you probably haven’t faced some of these problems just yet.

To answer the original question—can you burn pine in a fireplace?

Well, yes you can. But what’s clear is that anyone who wants to use pinewood for their fireplace must have a sense of responsibility. You need to know your way around a fireplace and understand the mechanism and physics of how your unit works.

When we say clean your chimney regularly, we are talking about once a year. But this is obviously subjective to how often you use your fireplace and the kind of firewood that is used for the same.