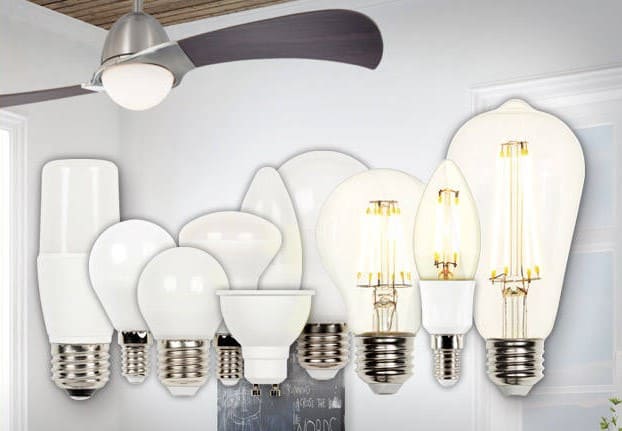 Not all ceiling fans will come with lighting kits but, if they do, it’s best to go for LED bulbs to get the most cost-effective illumination.

We say this because LEDs, over CFL or incandescent bulbs, are consistently rated to last longer, meaning less frequent bulb changes which in turn saves you more money over a longer period.

With all of this in mind, it’s no surprise that there’s a bustling online market out there for quality LED bulbs. We’ve compiled seven of them below and included why we liked them in a small write up of the product.

If you already have a ceiling fan, but find the lights a bit dim, LEDs are the best way to make your ceiling fan lights brighter.

Before we get to those, however, there is a basic but important aspect of your bulbs you’ll want to get right… 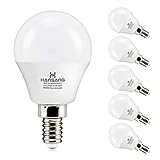 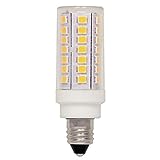 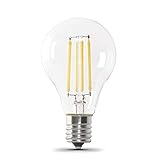 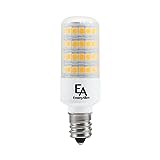 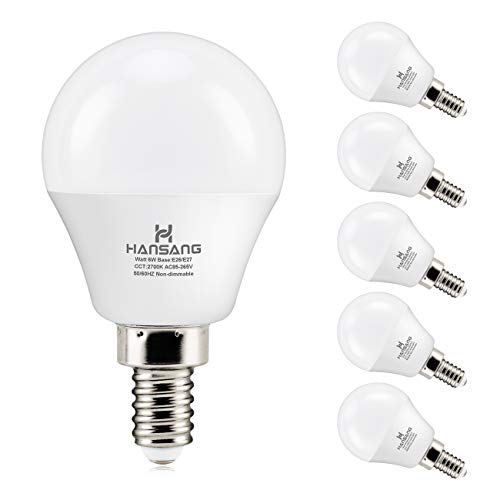 Being the most common for ceiling fan use, it only makes sense that our first LED light option is a candelabra type bulb, the Hansang Candelabra LED Bulbs.

We say bulbs because we recommend getting a six-pack of them since they come in such affordable prices, it never hurts to be stocked up for future bulb replacements.

These Hansang candelabra bulbs are one of the more popular options available to you, these products occupying the “led light bulbs ceiling fan” search term for the Amazon’s Choice program.

You have a choice regarding the intensity and hue of these bulbs too, with the two versions available being either a comfortable 2700 Kelvin warm white or the brighter daylight 5000 Kelvin for those who want stronger illumination.

We’d say this depends on the type of room you’re in, along with such factors as the room size, décor style, and which rooms they are.

For example, a warm white will work much better in smaller, more intimate rooms as opposed to the daylight which is better for areas like the kitchen, where it’s best to have brighter lighting to better see what you’re doing.

They put out the equivalent to non-LED sixty-watt bulbs on just six watts, making them very energy-efficient.

The fact that they’re guaranteed to average a thirty-thousand-hour lifespan also makes them a great option for the money-conscious buyer looking for a long-term cash saver. 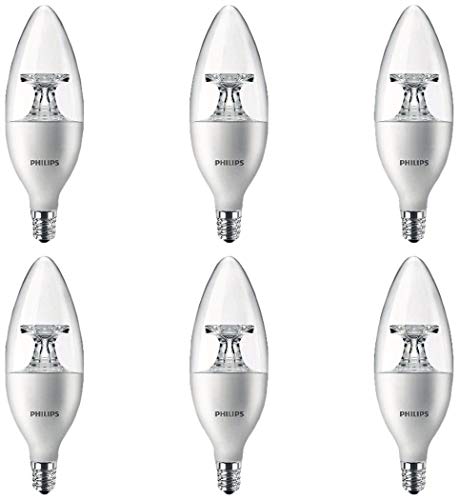 Next up we have the Philips Dimmable Candelabra LED Bulbs, a set of bulbs from a well-known brand in the industry, and whose bulbs are both Energy Star Certified and 100% mercury-free.

They’re the perfect choice for those who want slimmer, more stylized lighting implements.

Like most LED bulbs, they’re incredibly power efficient. They run at only 4.5 watts but, with their lighting performance, they’re batting the same as 40-watt incandescent bulbs, so you get more power for less when using these.

We’ve linked to a six-pack since it’s handy to keep several spare, and with their individual 15,000-hour lifetime our suggested purchase will net you a theoretical 90,000 hours of lighting, and all for an affordable price point.

The namesake for these bulbs references how they’re flicker-free and instead can be dimmed when installed with the right dimmer switches.

At full blast, they put out approximately 2700 Kelvin but can then be turned down to a soft glow. All of this light is of the warm variety, featuring a high CRI (Color Rendering Index) to deliver crisp lighting that’s ambient enough not to seem artificial and eye-straining. 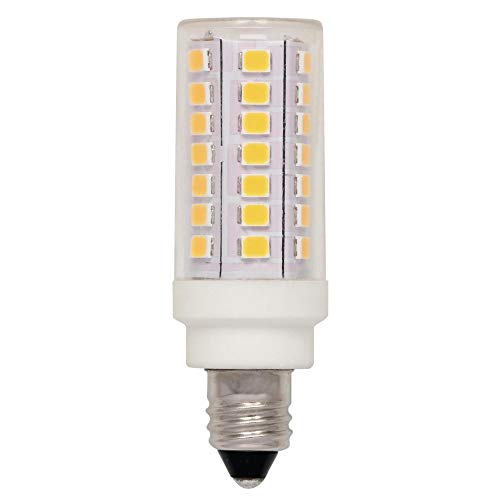 Here is our example of a mini candelabra bulb, the term used for bulbs that fit in E11 light fittings.

Shopping for mini candelabra bulbs can be trickier than shopping for their larger cousins, usually because it can be hard to get quality and longevity out of smaller bulbs that tend to have subpar construction because of how small they are.

One mini candelabra bulb we’re confident in recommending is the Westinghouse E11 LED Bulb, another energy-efficient lighting option that’s packed into smaller bulbs to fit into your mini candelabra fittings.

The fact they’re smaller doesn’t make them any less durable, however, with these ones, in particular, being damp rated so they can survive in both interior and exterior environments.

They’re also dimmable so they can deliver a variety of lighting levels.

They’re powered to five watts, making them an efficient alternative to your 50-watt incandescent or halogen bulbs and conserving up to 90% of power you’d otherwise use.

Each bulb provides 500 lumens of lighting power, that light being a bright white light at 3000 Kelvin. 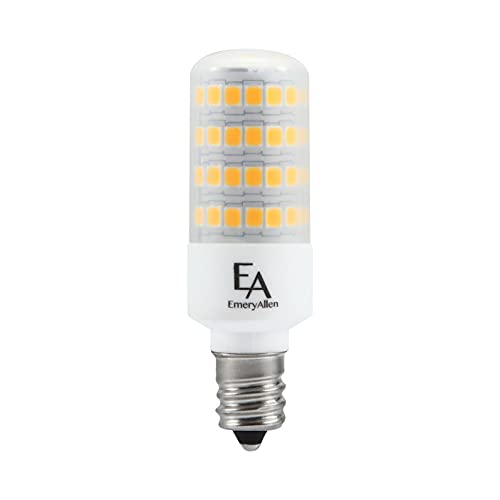 Another intermediate bulb alternative we have to show you is the EmeryAllen Intermediate Base LED Bulb, a larger, tubular bulb that’s ideal when used with enclosed light kits in smaller rooms.

Like most LED bulbs, they’re incredibly efficient at just five watts whilst outputting the light equivalent of a 50-watt incandescent bulb.

They’re also very long-lasting, even by LED bulb standards, boasting a 25,000-hour lifespan and a great head dissipation that reduces your electricity costs over this period. They also feature ceramic and PC which allows for excellent heat dissipation, reducing any chance that the bulbs will burn out and break.

They’re rated at 90 on the Color Rendering Index, generating a soft white, 3000 Kelvin light that’s nicer on the eyes than natural outdoor light.

You do have options for a warm white 2700 Kelvin or a bright white 4000 Kelvin light too, if you need a little less or a little more power.

Whichever type of bulb you pick, it’ll radiate in a 360-degree beam angle so you can have consistent light coverage, and they’re also compatible with most dimmer controls so you have a choice at how bright these bulbs are. 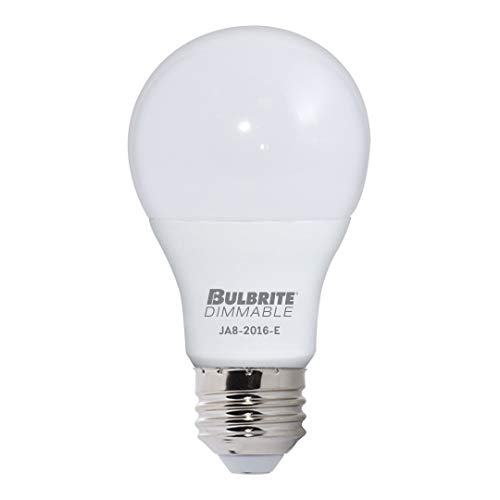 Some ceiling fans will use standard medium base bulbs in their light kits, usually, since it guarantees compatibility with many of the bulbs that you’ll use for other light sources.

Usually, this is a sacrifice since ceiling fans cap wattage at either forty or sixty watts, meaning that other bulbs can’t reach their full light output capacity.

However, with the advent of LED bulbs, using medium-based bulbs for ceiling fans has become a viable, energy-efficient option.

We’ve picked two of these medium-based LED bulbs, the first being the Bulbrite Dimmable LED Light Bulb. These are nine-watt bulbs that have the energy-efficiency that’s native to LED bulbs, but they’re also dimmable since they’re compatible with many different dimmer switches, including those that may be built into your ceiling fan’s body itself.

They’re frosted, so they’re great for meshing with ceiling fans that have a contemporary and clean-cut aesthetic.

The nine-watt input translates into about 800 lumens, meaning that they’re matching forty-watt incandescent bulbs in terms of output power. This makes them great for replacing your pre-existing medium base bulbs.

They’re predicted to last 25,000 hours and are rated as efficient for long-term cost savings by the Energy Star. 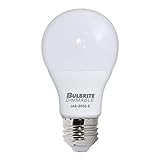 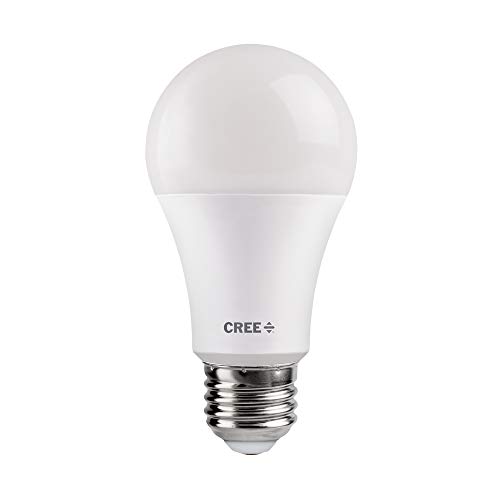 If our Bulbrite option above isn’t what you were looking for, we also have the Cree Dimmable LED Light Bulbs.

Cree specializes in multi-functional LEDs that are ideal for ceiling fan fixtures, the result being high-quality bulbs that are estimated to have a lifespan as long as twenty-two years.

These ones in particular operate off of just ten watts, matching the output of incandescent alternatives that take sixty watts.

This not only speaks volumes about their energy-efficiency, but the light they emit is also of a good quality. It’s designed to be natural enough to be kind on your eyes whilst vibrant enough to properly illuminate your surroundings.

This is achieved via a 90+ Color Rendering Index rating.

As the product name suggests, these are also compatible with most dimmer switches or control panels, enabling you to customize the light levels they give out. 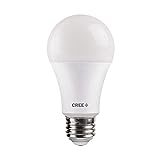 It may seem trivial, but you’d be surprised how many skip over this crucial detail when buying bulbs. Ceiling fans and the bulbs that they take are in no way standardized where size is concerned, sowing some confusion in those who don’t know this information.

You should know which fitting your ceiling fans are capable of supporting, so that when it comes time to fit, replace, or upgrade your bulbs, you can do so without any complication or needless waste of your money.

There are four main size categories for ceiling fan bulbs, these being the mini candelabra, the candelabra, the intermediate, and the medium base, in ascending order of size.

Candelabra and intermediate bulbs are the most common for ceiling fans, though mini candelabra is becoming increasingly popular with newer products.

The simplest and most obvious way of gauging which bulbs your ceiling fan supports is to measure the base of the bulbs you already have in them. Generally, a bulb base width of 0.43 and a height of 0.51 inches is a mini candelabra bulb, whilst a 0.47 width and 0.65-inch base are what defines standard candelabra bulbs.

Intermediates are slightly bigger again with 0.54 width and an 0.82-inch height. Medium bulbs are required where the base exceeds one inch in both width and height.

You’ll find that our selection of bulb options below has all four of these categories covered. This means that no matter what kind of fitting you have; you should be able to find a bulb that’s perfect for your home.

Not so keen on LED lights?

We realize that ceiling fans with bright LED bulbs may not fit into your home decor, if your into something a bit more warming, you might like to check out our article on the best ceiling fans with edison bulbs. A perfect mix of retro and modernism.

Perhaps you’ve decided that your ceiling fan is pretty old and you could do with a new one anyway. If that’s the case, make sure you take a look at our guide for ceiling fans with the brightest light.