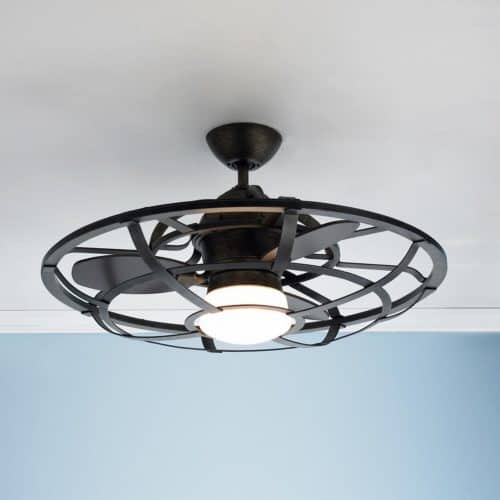 No matter your décor style, enclosed ceiling fans are always a great way to make a statement. The cage enclosure on them adds a design element that just isn’t present with other ceiling fans, those cages being able to take whichever form the manufacturer decides, from a clean and contemporary to rustic and historical styles.

This makes them great for use in most rooms, making them an easily accessible addition to the aesthetic of your home.

You’ll see this variety across the seven cage encased fans we’ve lined up for you, each having some information included about them so you can see which ones you like best. 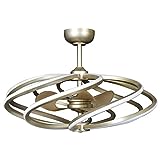 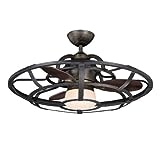 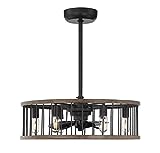 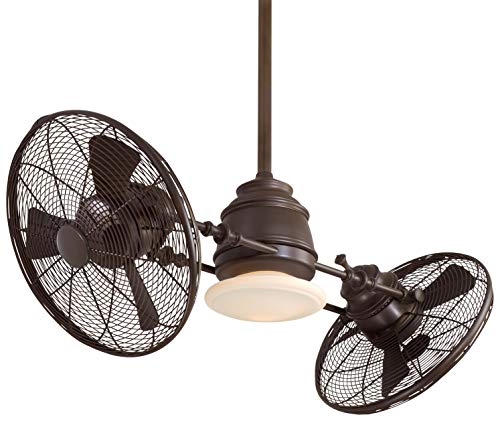 Our first cage enclosed fan we have to show you is the Minka-Aire Vintage Gyro fan, a rather unique model that finds its aesthetic in the early 20-Century, having an oil-rubbed metallic finish on its body.

Whilst it may use a vintage style as its namesake and in its design, these fans are made to rigorous modern construction standards and have an impressive three-speed wall control system built into them.

The light kit is contained in an opal glass enclosure at the center of the piece, and you have control over how dim or bright the light can be.

As for the fans, they’re made of three blades that span seventeen inches, but you can adjust them up and down if needed so that they can cover as wide or as small a room as you desire.

It even comes with a six-inch down rod and an angled ceiling adapter that allows you to mount it to ceilings angled up to twenty-one-degrees, so it can cover even asymmetrical rooms. 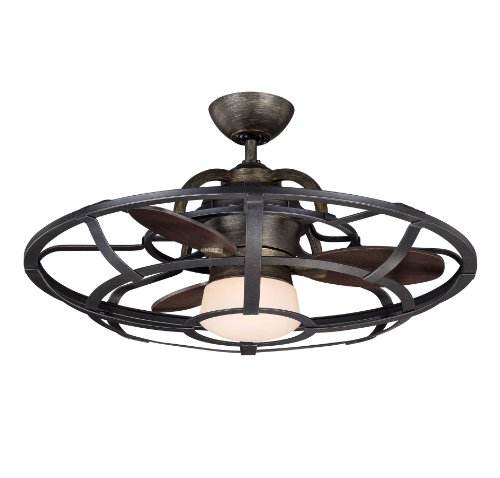 From here on we’ll be getting into some of the smaller caged ceiling fan options on the market, which by smaller we mean under thirty inches in fan diameter.

The first of these is the Savoy House Alsace 26-Inch Ceiling Fan, though you’ll often see it described as a fandalier, a portmanteau of the words fan and chandelier since it combines the best elements of both.

Its style is rustic, you can tell that from the picture but the story behind this particular model’s design only adds to this aesthetic. It’s inspired by old French wine barrels that are used across vineyards in the country, and they’ve taken that inspiration all the way by making the fan blades themselves with a reclaimed wood finish adorning chestnut blades.

This strikes a perfect balance between upscale sophistication and rustic simplicity, making it a great addition to most rooms but given its design history, we’d suggest it’s best placed in kitchens, wine rooms, and cozy studies, maybe even a man cave?!

Centered on the fan is one seventy-five-watt bulb which only reinforces our suggestion that this is best placed in the smaller rooms of your house. It’s controlled by a remote control, so you can operate and adjust the fan from the comfort of your chair if need be. 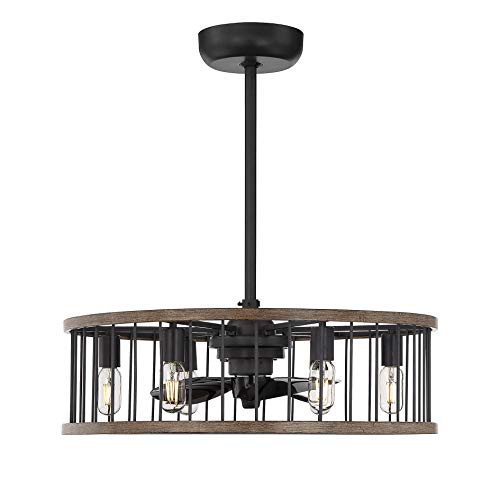 If the previous product was close but no cigar, then maybe this next fan from Savoy House is more of what you’re looking for. It’s the Savoy House Kona 26-Inch Ceiling Fan, another so-called fandalier that this time has a more contemporary look thanks to its cage drum shape, muted Sapele wood-finish, and added lighting instruments.

What’s more, it’s also ETL rated for both interior and exterior use, making it the perfect option for a roofed decking area that’s exposed to the elements. This option is perfect for those seeking some added illumination in your small ceiling fans.

Its improved illumination capacity comes from the fact that it has six LED bulbs build into the drum-like cage of its body, affording you more lighting packed into the same 26-inch product.

The fan speed and bulbs are both controlled by a remote control that’s included in the purchase, meaning you won’t have to move a muscle when you want to adjust the fan’s movement or the lighting level. 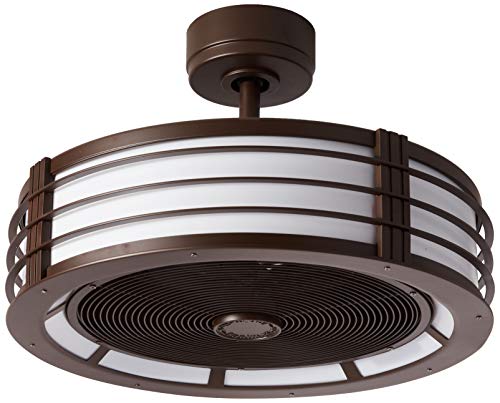 Continuing with the trend of contemporary caged fans, next up we have the Fanimation Beckwith 12-Inch Enclosed Ceiling fan, a much smaller model that has a very modern, clean-cut design. Being fully enclosed, it’s as caged as a caged ceiling fan can get, and the drum design makes it very sturdy and wobble-free.

Its drum design is bordered by dimmable LED lights that add some illumination to this product. It’s dry rated for indoor use, hence why we’d suggest it’s great for those smaller rooms in your home, and we wouldn’t tempt fate by trying to install it in an outside area.

The fan and the lights are all able to be controlled by an included remote control, making it convenient to operate once you’ve settled down.

If you make an additional purchase of the relevant controls, you can also use Wi-Fi or Bluetooth to connect to these fans and control them with your mobile phone, adding yet another degree of convenience to this purchase. 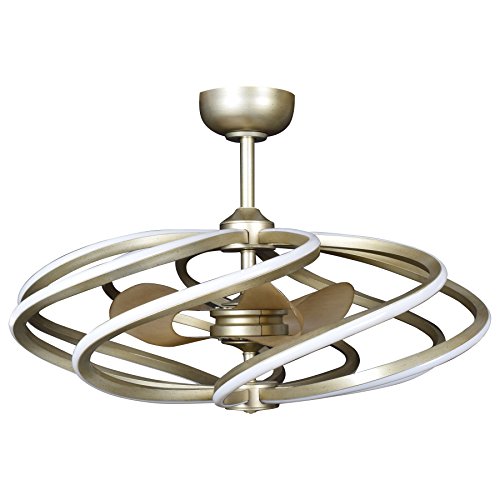 Next up is the Access Lighting Vortex, an indoor ceiling fan whose cage is very eye-catching and more elegant in its style than the option at number one.

That cage is made with a lightweight and easily-workable aluminum that has been warped into its signature vortex shape, and then finally finished with gold coloring and a white acrylic diffuser so that the light transmits across it for a satisfying shine, without suffering from glare.

The Access Lighting Vortex is ETL certified, complying with all nationally recognized product safety standards. If you need to have multiple rooms covered, then you’ll find that these fans can fit in with most rooms and even come with a six-inch down rod to fit in rooms with lower ceilings.

If you do get several of these fans, they can all be controlled from one remote. This eliminates a lot of the complications of having multiple fans in the home.

There’s also integrated LED module compatibility, allowing you to add some lighting to these fans if you want. 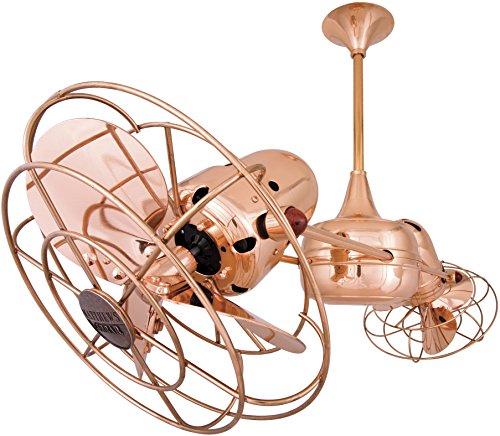 The last of the larger encased ceiling fans on this list, the Matthews Duplo-Dinamico 39-Inch Dual Ceiling Fan is an example of more contemporary, modern home decoration.

It achieves this through its neutral, sleek brushed body made from cast aluminum and heavy spun steel, which is matched a bright polished copper finish. Even the generous curvature of the fan cages themselves give these a passive aesthetic that can fit in in most rooms.

This contemporary look not only helps them fit in most interiors but they’re also damp rated for outdoor use.

Both fan heads have six fan blades protruding from them, the fan heads also being adjustable for more precise cooling when installed in larger rooms. Speaking of installation, the wall controls that come with these dual fans allow you to change between different fan speeds from a distance and at your own convenience.

The mechanism will give you control of both axial rotation speed changes and the actual blade speed, affording you maximum control over these large fans. 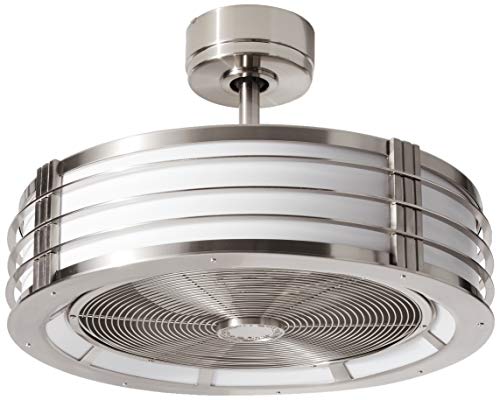 The final cage enclosed fan we have to show you is another model from Fanimation, the Henry LED Caged Ceiling Fan.

This model again conforms to a modern, contemporary style, being another compact fan that measures approximately twelve inches in diameter and is shining with a brushed nickel finish. If you want it in roughly double the size, you can also get a twenty-three-inch variant that’s decorated with an oil-rubbed bronze finish.

With a sleek black meshed ring exterior, it’s probably the most modern-looking fan we have on the list and is perfect for both lighting and cooling smaller indoor spaces, whilst tying the room together as an accessory.

It’s best for indoor use but it is damp rated to withstand most moisture it should face in a roofed exterior location. The standout property of this option is its adaptability, with it being installable on normal ceilings, low ceilings, and even sloped ceilings.

It lights its surroundings via an integrated LED light kit that’s built into the center of its body. It’s powered to eighteen watts, providing direct downlight wherever it’s placed, though the lighting is more ambient than obtrusive for a relaxed glow.

The fan movement and the lighting are all controlled by a handheld remote, allowing you to control the fan settings without interrupting your day.

Like the previous Fanimation model, buying a separately sold control panel will allow you to control these fans through your handheld electronics via your Wi-Fi or Bluetooth connections.