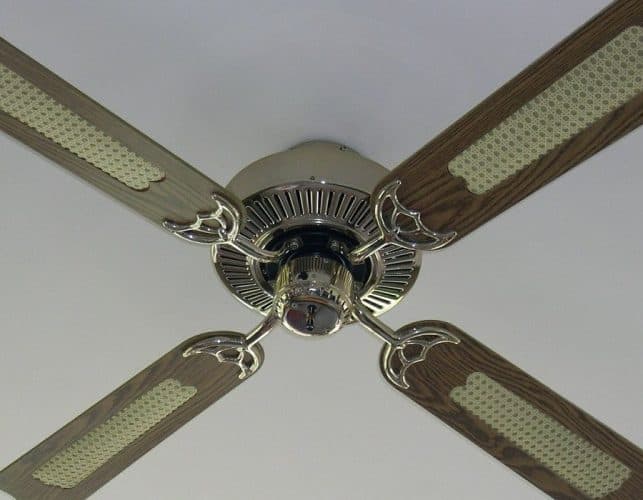 Most people won’t know what a ceiling fan blade arm is unless theirs have broken or they’ve fancied an upgrade to some new fancy blade arms. If you’re reading this page, it’s likely you’re in one of those two categories! We’re here to answer the question as to whether ceiling fan blade arms are universal or not.

What blade arms do you need?

Check the model of your fan to find the exact match for your fan blade arms. Different manufacturers have different hole patterns which affect the fit of replacements. Not just any blade arms will work.

Ceiling fans from big box stores may not manufacture replacement parts after they discontinue the product. In this unfortunate case you will likely need to replace all blade arms or resort to replacing the entire fan if your hole patterns are unlike any you find on the available market.

You can more readily rely on a ceiling fan manufacturer or high quality producer to make durable parts that will need replaced less often. It will also be easier to find replacement parts for a ceiling fan that was made by a more popular manufacturer (take a look at our post about the best ceiling fan brands).

Other companies have started producing ceiling fan blade arms for some popular brands, so it is definitely worthwhile looking for replacements before buying everything brand new.

It’s also worth checking to see if you ceiling fan is still under warranty, if so you can get yourself some free replacements!

What is a ceiling fan blade arm?

A ceiling fan blade arm is the part that holds the blades and attach to the centre housing on a ceiling fan.

Ceiling fan blade arms, also known as irons or brackets is what attaches the fan blades to the central mechanism that spins them.

Ceiling fan blades can come in a variety of finishes; metal, wood, plastic, canvas, rattan and more, but the blade arms are usually made of metal for it’s strength.

The arm will generally have three to five holes to allow it to be securely attached to the fan blade. Through each of these holes is a screw.

Ceiling fan blade arms are often decorative and add style to the fan. This decoration is not only aesthetically pleasing but also functional. It secures the blade in place and helps keep it balanced to avoid any wobbling. The shame is, you can only appreciate the style of the arm when the fan is not spinning!

How to replace a broken ceiling fan blade arm

Once you know that you have to replace a fan blade arm on your ceiling fan, you know exactly what to do. Follow these instructions to successfully install your replacement fan blade arms and check for wobbles.

This is the most important step. You need to find replacement ceiling fan blade arms which match the original hole pattern. If you do not, you may experience a wobble and throw the balance of your fan blades off. Try the manufacturer’s website or places like Amazon for replacements.

Step 2: Turn off power to your ceiling fan.

You do not want to be electrocuted. Turn off the light switch and if there is anyone else present in your dwelling who might turn the fan on while you’re repairing it, you should cut off power to the fan by flipping its switch on the circuit breaker. This may be generalized to the whole room.

You can do this by twisting, unscrewing, or removing secure attachments. We remove this to give you better access to the brackets of the fan. This step may not be necessary if you do not have one central bulb and instead have multiple, but this is a good general practice.

Step 4: Remove the screws from the old fan blade arms.

The fan blade arms will be attached to the brackets on the fan as well as to the fan blades. Remove the screws from all of these holes (the amount will depend on the design of your ceiling fan and how many blades it has). Keep these screws for the next step.

Step 5: Use the old screws to secure the new fan blade arms.

You want to use the hardware that is original to the ceiling fan. This will help to make sure that everything will be a tight, proper fit and help to prevent wobbling from ill-fitting screws that don’t adequately support the weight of your fan blades.

You should now have a fully reassembled ceiling fan, with new blade arms and all.

Step 7: Turn the power back on for your fan.

You want to reconnect the power by flipping the switch on your breaker again. This will return the power flow to your fan and allow you to assess how you did.

Step 8: Turn on the fan to check for wobbles.

If you hear the sound of a ticking, tighten all of your screws because it might be a loose screw. If you still have a wobble, press upward on each of the fan blades until they all align.

You have successfully replaced your broken ceiling fan blade arm.

So whether you need to replace your broken ceiling fan blade arms, or just fancy a change on your existing ones, hopefully we’ve helped you find, purchase and install your new blade arms.